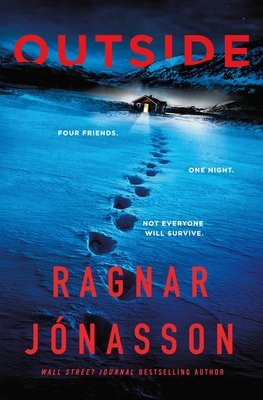 Four friends. One night. Not everyone will come out alive . . .

It is in the middle of nowhere and there's no way of communicating with the outside world.

They are isolated, but they are not alone . . .

As the night darkens, and fears intensify, an old tragedy gradually surfaces - one that forever changed the course of their friendship.

Those dark memories could hold the key to the mystery the friends now find themselves in.

And whether they will survive until morning . . .

RAGNAR JONASSON is an international number one bestselling author who has sold over three million books in thirty-six countries worldwide. His books include the Dark Iceland series and the Hulda series. Jonasson was born in Reykjavik, Iceland, where he also works as an investment banker and teaches copyright law at Reykjavik University. He has previously worked on radio and television, including as a TV news reporter for the Icelandic National Broadcasting Service, and, since the age of seventeen, has translated fourteen of Agatha Christie's novels. Ragnar is the co-founder of the Reykjavik international crime writing festival Iceland Noir. His critically acclaimed international bestseller The Darkness is soon to be a major TV series, and Outside is soon to be a feature film. Jonasson lives in Reykjavik with his wife and two daughters.

"Jonasson and translator Victoria Cribb do a fine job of setting the scene, developing the characters and keeping readers in suspense with a tight, clean noir style, prose style. 'Somebody,' Helena says prophetically, 'is going to end up dead before this trip is over.''" —Bruce DeSilva, The Chicago Tribune

"An intense standalone...There is so much to like here: the complexity of the quartet’s relationships, Jónasson’s powerful, streamlined writing, and the parallels between an unforgiving setting and the characters' seething grudges. Readers will be drawn into Jónasson’s forbidding Iceland landscape, where it’s anyone’s guess who will make it out alive." —Booklist (starred review)

“… a classic ... I believe he has penned the Icelandic version of Quentin Tarantino’s Reservoir Dogs.” —Book Reporter

"[An] excruciatingly slow-motion avalanche in which it’s obvious from the beginning that “something’s got to die before we finish this trip”; the only questions are who, how many, under what circumstances, and at whose hands....A shivery delight." —Kirkus Reviews

"This book has a quality and cleverly constructed plot...it’s entertaining, suspenseful and twisty." —Mystery Tribune

"One of the best crime writers on the planet." —Mike Lupica, New York Times bestselling author

“Brilliantly entertaining, captivating the reader from page one. Impossible to put down.” —Frettabladid newspaper (Iceland)

“Ragnar Jónasson is the Nordic author of the moment.” —Vogue (Scandinavia)

Ragnar Jónasson hailed as one of "the heirs to the Agatha Christie crown" by The Daily Telegraph (UK).

"In Jónasson’s books, the harsh and unforgiving Icelandic winter might as well be its own character...a perfect storm of danger and intrigue." —New York Post on The Girl Who Died

"Is this the best crime writer in the world today? If you're looking for a mystery to get lost in during lockdown..." —The Times, UK on The Girl Who Died

“A world-class crime writer...one of the most astonishing plots in modern crime fiction...The Mist is a triumphant conclusion to the trilogy and makes Iceland’s pre-eminence in the crime genre even more marked....Jónasson is up there with the best.” —The Sunday Times, UK

"Jónasson is a unique voice in this genre" —The Times Literary Supplement, UK

"Ragnar Jónasson is the Stephen King of Icelandic thrillers." —She Reads