Analogia: The Emergence of Technology Beyond Programmable Control (Paperback) 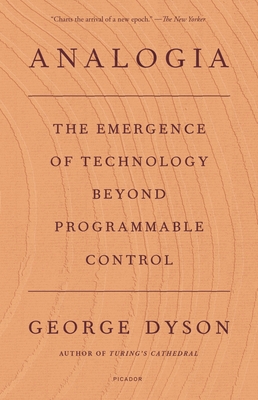 In Analogia, technology historian George Dyson presents a startling look back at the analog age and life before the digital revolution—and an unsettling vision of what comes next.

In 1716, the philosopher and mathematician Gottfried Wilhelm Leibniz spent eight days taking the cure with Peter the Great at Bad Pyrmont in Saxony, trying to persuade the tsar to launch a voyage of discovery from Russia to America and to adopt digital computing as the foundation for a remaking of life on earth. In two classic books, Darwin Among the Machines and Turing’s Cathedral, George Dyson chronicled the realization of the second of Leibniz’s visions. In Analogia, his pathbreaking new book, he brings the story full circle, starting with the Russian American expedition of 1741 and ending with the beyond-digital revolution that will complete
the transformation of the world.

Dyson enlists a startling cast of characters, from the time of Catherine the Great to the age of machine intelligence, and draws heavily on his own experiences at the Institute for Advanced Study in Princeton, New Jersey, and onward to the rain forest of the Northwest Coast. We are, Dyson reveals, entering a new epoch in human history, one driven by a generation of machines whose powers are no longer under programmable control.

George Dyson, a dual citizen of the United States and Canada, is an independent historian of technology whose subjects have included the development (and redevelopment) of the Aleut kayak (Baidarka, 1986), the evolution of artificial intelligence (Darwin Among the Machines, 1997), a path not taken into space (Project Orion, 2002), and the transition from numbers that mean things to numbers that do things in the aftermath of World War II (Turing’s Cathedral, 2012).

"Pleasingly eccentric [and] impossibly wide-ranging . . . Racing from the Stone Age to the coming singularity, Dyson is in fine fettle . . . [A] lively, if deeply strange, narrative . . . A thoughtful—and most thought-provoking—exploration of where our inventions have taken and will take us.”
—Kirkus (starred review)

"History, philosophy, science, and memoir blend in this unique look at how technology has remade the world and will likely command humanity’s future . . . This unusual book examines its themes with smooth, lyrical writing."
—Publishers Weekly

"This is the most delightfully peculiar book I've ever read. It's grand and intimate, personal and cosmic, and about digital computing and archaic hunter gatherers. Every paragraph is a surprise."
—Kevin Kelly, founding executive editor of Wired

"Few writers could string together a coherent and compelling tale out of elements as varied as the Bering-Chirikov expedition to Siberia in 1741, the construction of a US heliograph intelligence network, tree houses, kayak designs and the future of artificial intelligence. Dyson is one in this quirky personal history of technology."
—John Tothill, Financial Times

"George Dyson's Analogia is a wonderful combination of the universal and the intimate, the timeless and the immediate, the scientific and the humane. A wise and open-minded writer sheds new light on our world."
—James Fallows, author of National Defense and Our Towns

"Analogia is a work of originality and ambition unlike any you've encountered. George Dyson transmutes memoir, history, and forecast into a page-turning tale in which Geronimo, J. Robert Oppenheimer, Catherine the Great, Kurt Gödel, and Steller's sea cow play roles. It's no less the story of the magnificent Dysons, a larger-than-life family spanning physicist Freeman, mathematician Verena, tech influencer Esther, and the author himself, an off-the-grid public intellectual. Analogia offers more serious fun than a dozen of the usual bestsellers."
—William Poundstone, author of The Doomsday Calculation: How an Equation That Predicts the Future is Transforming Everything We Know About Life and the Universe

"This strange, beautiful, haunting work is like a kaleidoscope of stories, its pattern locking into place at the end. Mixing the rise of computation, the brutal wars on the Apache, the construction of ancient kayaks, and a host of other matters with the author's own remarkable story, George Dyson's book will stick in readers' minds long after they close its covers. Analogia belongs on the shelf that holds Naipaul's Enigma of Arrival and Sebald's Rings of Saturn. And it can stand proudly in their exalted company."
—Charles Mann, author of 1491: New Revelations of the Americas Before Columbus

"This book pierces through the fog of everyday life. Read and you will become aware of history you need to know, and of how the last few centuries of the human story sit within a much larger, epochal frame. An extra treat is insight into the remarkable Dyson family."
—Jaron Lanier, author of Ten Arguments for Deleting Your Social Media Accounts Right Now

“A thought-provoking deep dive into the ideas and stories behind some of the biggest issues of our time. One of Dyson’s best.”
—Greg Bear, author of Darwin's Radio

"Only George Dyson could have written this book. Equal parts scholar, natural scientist, and adventurer, Dyson seamlessly blends science, history, philosophy, engineering, cultural commentary and memoir to give us a meditation on time and the relationship between mind and matter; people and machines; and what it all means for the future of humankind and the earth."
—Deborah Tannen, professor of linguistics at Georgetown University and author of You Just Don't Understand, You're Wearing THAT? and Finding My Father

"George Dyson, over the distance of a mere 250 pages, ties together the fine strands of time, space, science, and self, in a gossamer web as beautiful and strong as a spider’s. A wondrous and stellar work.”
—Andrei Codrescu, author of The Posthuman Dada Guide: Tzara and Lenin Play Chess