Proof of Corruption: Bribery, Impeachment, and Pandemic in the Age of Trump (Hardcover) 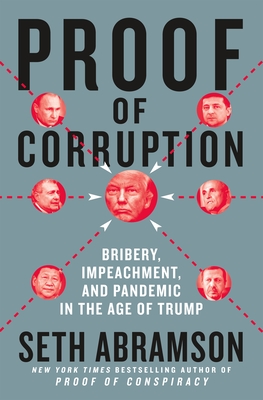 In the third volume of his Proof series, New York Times bestselling author Seth Abramson takes readers on a deep dive into the Ukraine scandal, revealing it to be more sinister, complex, and transnational than previously thought. Abramson’s research on Trump administration corruption positions the Ukraine scandal as the foreseeable culmination of years of clandestine machinations involving scores of players, from Beijing to Budapest, Ankara to Caracas, Warsaw to Jerusalem, Kyiv to Riyadh, and Moscow to D.C.

While many know about the July 2019 telephone call that ignited the Ukraine scandal, most don’t know about the concurrent attempts by members of Trump’s inner circle to take over Ukraine’s national gas company and bolster dangerous pro-Kremlin Ukrainian oligarchs—moves that would have benefited Putin and destabilized Ukraine’s government and economy.

In Beijing, Trump’s dealings with the Chinese government not only enriched him and his family, but also culminated in him successfully seeking 2020 election interference from Xi Jinping in the form of closely held information about Joe Biden. In Venezuela, many of the actors involved in the Ukraine scandal engaged in similarly secretive, Kremlin-friendly negotiations that undermined U.S. policy. In Syria and Iraq, Trump’s personal indebtedness to autocrats in Turkey, Israel, Saudi Arabia, and the UAE cost untold lives. And Abramson brings the story back to an increasingly fractured and depleted United States, where the COVID-19 pandemic exposes the staggering domestic consequences of the Trump administration’s foreign machinations.

In Proof of Corruption, Seth Abramson lays bare Trump’s decades-long pattern of corruption. This globe-spanning narrative is an urgent warning about the unprecedented threat posed by a corrupt president and his administration.

SETH ABRAMSON is a former criminal defense attorney and criminal investigator who teaches journalism and legal advocacy at the University of New Hampshire. A graduate of Harvard Law School and the Iowa Writers’ Workshop, he is a political columnist at Newsweek and the author of over fifteen books, including Proof of Conspiracy and Proof of Collusion. He lives in New Hampshire with his wife and two rescue hounds, Quinn and Scout.

“Detailed . . . there’s much to ponder here, and many will want to do just that.” —Booklist on Proof of Conspiracy

“A richly documented indictment of power and corruption that bears urgent discussion in the coming electoral cycle.” —Kirkus Reviews on Proof of Conspiracy

“Chilling . . . a useful guidebook to the still-unfolding crisis. Abramson . . . methodically assembles the most important pieces of the puzzle to present a comprehensive picture of what [he] calls the most significant criminal investigation of our lives.” —Gothamist on Proof of Collusion

“A detailed, labyrinthine chronicle of contacts between Trump and his associates on the one hand and Russian officials, oligarchs, and fixers on the other. . . . Abramson's exhaustive amassing of published evidence is useful.” —Publishers Weekly on Proof of Collusion