A Wild and Precious Life: A Memoir (Paperback) 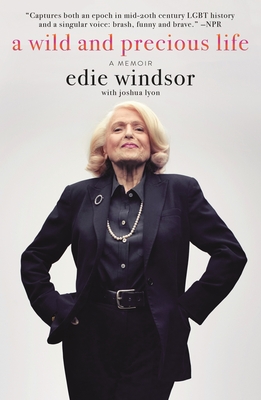 A lively, intimate memoir from a marriage equality icon of the gay rights movement, describing gay life in the 1950s and 60s New York City and her longtime activism.

“A captivating and inspiring story of a queer woman who believed in her right to take up space and be seen.”—BuzzFeed

Edie Windsor became internationally famous when she sued the US government, seeking federal recognition for her marriage to Thea Spyer, her partner of more than four decades. The Supreme Court ruled in Edie’s favor, a landmark victory that set the stage for full marriage equality in the US. Beloved by the LGBTQ community, Edie embraced her new role as an icon; she had already been living an extraordinary and groundbreaking life for decades.

In this memoir, which she began before passing away in 2017 and completed by her co-writer, Edie recounts her childhood in Philadelphia, her realization that she was a lesbian, and her active social life in Greenwich Village's electrifying underground gay scene during the 1950s. Edie was also one of a select group of trailblazing women in computing, working her way up the ladder at IBM and achieving their highest technical ranking while developing software. In the early 1960s Edie met Thea, an expat from a Dutch Jewish family that fled the Nazis, and a widely respected clinical psychologist. Their partnership lasted forty-four years, until Thea died in 2009. Edie found love again, marrying Judith Kasen-Windsor in 2016.

A Wild and Precious Life is remarkable portrait of an iconic woman, gay life in New York in the second half of the twentieth century, and the rise of LGBT activism.

JOSHUA LYON (co-writer of Edie Windsor's A Wild and Precious Life) is the author of Pill Head: The Secret Life of a Painkiller Addict and has ghostwritten several New York Times bestselling and award-winning LGBTQ memoirs. He lives in Brooklyn, New York.

EDIE WINDSOR was an American LGBTQ rights activist and a technology manager at IBM. She was the lead plaintiff in the Supreme Court of the United States case United States v. Windsor, which successfully overturned Section 3 of the Defense of Marriage Act, which provided that the term "spouse" only applied to marriages between a man and woman—a landmark legal victory for the same-sex marriage movement in the United States. In 2013 she was the Grand Marshal of the New York City LGBTQ Pride March and the runner-up, to Pope Francis, for Time Magazine’s Person of the Year. Edie passed away peacefully on September 12, 2017. She is survived by her second wife, Judith Kasen-Windsor.

"Captures both an epoch in mid-20th century LGBT history and a singular voice: brash, funny and brave." —NPR

“Perfectly encapsulates the essence of an amazing person and life.”—The Advocate, Best LGBTQ Memoirs of 2019

“A captivating and inspiring story of a queer woman who believed in her right to take up space and be seen.”—BuzzFeed

"Windsor’s story fighting for what she believed in is one that will leave readers inspired." —NBC OUT

"This trailblazer’s memoir isn’t captivating solely for Windsor’s reflections on the historic ruling nor her influential work developing software at IBM, it’s Windsor’s, along with friends’ and former flames’, recollections of lesbian nightlife and community in pre-Stonewall Riots New York City—a moment in LGBTQ history both sometimes glossed over in a rush to the queer rights movement’s later, more formative years post-Stonewall and rarely published from a first-person perspective as fiery as Windsor’s—that kept this reader flipping page after page well into the night." —Austin Chronicle

“There’s so much more to Windsor’s story than her Supreme Court case that struck down the Defense of Marriage Act. And if you learn anything from her memoir, I hope it’s her personal motto: Never postpone joy.”—Book Riot

“Windsor’s inspiring zeal for life and brave, fierce love are thoroughly gripping all on their own. Brilliant and unapologetic, Windsor navigates the mid-century immigrant community in Philadelphia, the lesbian scene of 1960s Manhattan, and the United States Supreme Court with flair, insight and, of course, incredible panache.”–Philadelphia Magazine

"[A] must-read for any young queers who want to know where our community came from." —Harper's Bazaar

"Lyon does an excellent job of making sure Windsor’s stirring and joyful voice shines through." —Rewire

“The great pleasure of this book is in spending time with Windsor’s voice.”—Tampa Bay Times

“Windsor woos readers with breezy wit, racy love stories, and seemingly casual-not-casual, semi-nonchalant depictions of being a lesbian in the mid-20th century, telling us what it was like living in the shadows but flirting hard with the light.”—The Washington Blade

“In a forthright and vivid memoir...Windsor reveals her early realization of her attraction to women and her long struggle to navigate homophobia among family members and at work, to live openly as a lesbian, and to marry the woman she loved.... A candid portrait of an indefatigable woman.” —Kirkus Review

“With many sparkling memories paired with materials from personal archival collections, this account enthralls with every turn of the page....Whether readers are seeking material on U.S. LGBTQ history, particularly regarding the pre–Stonewall era, or an enrapturing memoir, this work will satisfy....Don’t miss out on this essential read.”—Library Journal (starred review)

“A big-picture look at Windsor’s entire life, including her immigrant experience and childhood in Philadelphia; her enviable 1950s Greenwich Village social life; her relationship with Thea Speyer that began rocky and ended 44-years later when Thea succumbed to MS; her late-life yet intense activism; and her second marriage to Judith Kasen-Windsor. Most enjoyable in this telling is Windsor’s willingness to reflect and adjust.”—Booklist