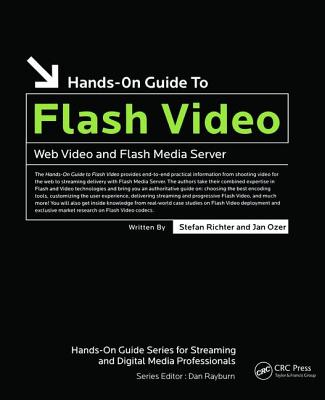 The Hands-On Guide to Flash Video is a professional reference book written by industry experts that are currently helping professionals produce Web video and implement Flash Media Server. This book covers Flash Video production from soup to nuts, beginning with how to configure your camcorder and ending to advanced server techniques like bandwidth detection and FMS logging and reporting. Real word lessons from case studies of successful Flash Video deployments are also included. Supplemental files located at: www.flashvideobook.comBy reading this book, you'll learn to: Shoot high quality video for streaming Choose the best encoder and encoding techniques for producing Flash Video Deploy Flash Video via progressive download or via the Flash Media Server. Create and light a compression friendly set Deinterlace and pre-process your video prior to encoding Choose encoding parameters like data rate, resolution and frame rate Optimize encoding with Sorenson Squeeze, Flix Pro and the Adobe Flash Video Encoder Shoot and produce chromakey video for alpha channel delivery Customize a Flash player via skinning, and use Cue Points for navigation.

Stefan is a certified Flash Developer who has been involved with Flash Media Server since its very early days. He was the driving force behind Europe's first Flash-centric video hosting provider and now runs one of the largest resources on the subject at Flashcomguru.com. As well as holding the position of VP of Application Development at Dallas-based POPview he handles a variety of projects from his home office in the UK, specializing in Flash Video and Rich Internet Applications for clients that include CNET, USA Network and Unilever. Stefan is the author of a series of Adobe Developer Center articles, has spoken at several industry events and contributes a regular column on Flash Video to Streaming Media Magazine.Jan has worked in digital video since 1990, joining PC Magazine as a contributing editor in 1996, and EventDV in 1994, and is a frequent contributor to Streaming Media Magazine. Jan has written 12 books on digital video, translated into 7 languages. In 1994, Jan's company, Doceo Publishing, released the Video Compression Sampler, the first comparison of CD-ROM compression technologies. In January, 2006, Jan released two white papers through StreamingMedia.com that rigorously compared the quality and usability of the Windows Media, Real, Apple's H.264 and Flash codecs (Proprietary Codecs, 2006: Choosing and Using the Optimal Video Codec) and solely Flash codecs (Flash Codecs, 2006: Choosing and Using the Optimal Flash Codec). Jan has lectured internationally on streaming media production since 1998.