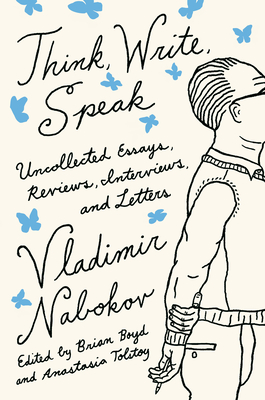 A rich compilation of the previously uncollected Russian and English prose and interviews of one of the twentieth century's greatest writers, edited by Nabokov experts Brian Boyd and Anastasia Tolstoy.

“I think like a genius, I write like a distinguished author, and I speak like a child": so Vladimir Nabokov famously wrote in the introduction to his volume of selected prose, Strong Opinions. Think, Write, Speak follows up where that volume left off, with a rich compilation of his uncollected prose and interviews, from a 1921 essay about Cambridge to two final interviews in 1977. The chronological order allows us to watch the Cambridge student and the fledgling Berlin reviewer and poet turn into the acclaimed Paris émigré novelist whose stature brought him to teach in America, where his international success exploded with Lolita and propelled him back to Europe. Whether his subject is Proust or Pushkin, the sport of boxing or the privileges of democracy, Nabokov’s supreme individuality, his keen wit, and his alertness to the details of life illuminate the page.

VLADIMIR NABOKOV studied at Cambridge University, then lived in Berlin and Paris, writing in Russian under the pseudonym Sirin. In 1940, he moved to America, where he taught at Stanford, Wellesley, Cornell, and Harvard, and wrote some of his greatest works, including Speak, Memory; Lolita; and Pnin. In 1959, he returned to Europe, where he wrote Pale Fire and Ada. He died in Montreux, Switzerland, in 1977.

BRIAN BOYD, University Distinguished Professor of English, University of Auckland, has published on literature, art, philosophy, anthropology, and psychology, but most of all on Vladimir Nabokov, as annotator, bibliographer, biographer, critic, editor, and translator. His work has won awards on four continents.

ANASTASIA TOLSTOY is a junior research fellow at Wolfson College, University of Oxford, where she completed a DPhil on Vladimir Nabokov. She is the co-translator, with Thomas Karshan, of Nabokov's neo-Shakespearean blank verse drama The Tragedy of Mister Morn.

“Immense fun. . . . Any sensitive reader will linger over the beautiful sentences with which Nabokov enriches even his most casual prose.” —The Washington Post

“The beauty and fascination of his views on literary and other matters rest . . . on his openness to laughter. . . . Nabokov had a lot to laugh about.” —The Spectator

“Now we have the full Nabokovian ex cathedra pronouncements in all their typical vim and vigour.” —The Times Literary Supplement (Best Books of the Year)

“Every interview Nabokov granted was a defense, not only of himself against charges of scandal and obscenity, but also of art, the imagination, and literature itself. He devoted his life to the shiver in the spine that passes from writer to reader, and it’s there that he lives on.” —Financial Times

“The greatest pleasure in reading this book is the impression you get that you’re opening your presents underneath the Christmas tree. . . . Boyd and Tolstoy put together an amazing variety of tidbits. . . . A lovely blend of literary elements and of personal details . . . you feel particular pleasure when you get a glimpse of the man hiding behind the famous writer." —Transatlantica

“A must-read . . .  Nabokov notices (and is often amused by) everything. . . . Boyd and Tolstoy have brought out a volume that no Nabokov fan can overlook.” —The Post and Courier