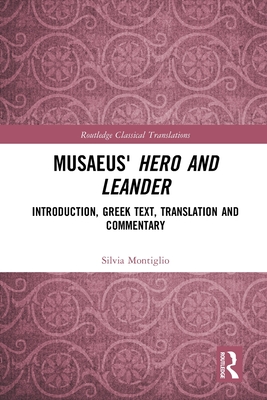 This book offers a new English translation of Musaeus' poem Hero and Leander, with the original Greek on the facing page, a substantial introduction and a detailed commentary.

The tragic romance of Hero and Leander has had and still has a great appeal, inspiring countless writers, painters, sculptors, and musicians. The Introduction aims at situating the poem within its literary tradition and cultural context as well as at drawing its major themes and describing the salient features of its style. Because Hero and Leander enjoyed an immense and uninterrupted popularity, the Introduction also devotes a large section to the poem's reception in literature, which crosses paths with the reception of the other main ancient poetic treatment of the legend, Ovid's Heroides 18 and 19. The commentary, which follows the Greek text and its translation, is addressed to a variety of readers: the student and the scholar of Greek literature, as well as those of other literatures in which the poem has been inspirational. This work has no precedent in the English language.

This new translation will be of interest to students and scholars of Greek and late antique literature, as well as those working on mythology and classical reception.

Silvia Montiglio is Gildersleeve Professor in Classics at Johns Hopkins University, USA. She is the author of Silence in the Land of Logos (2000), Wandering in Ancient Greek Culture (2005), From Villain to Hero: Odysseus in Ancient Thought (2011), Love and Providence: Recognition in the Ancient Novel (2013), The Spell of Hypnos: Sleep and Sleeplessness in Greek Literature (2016), and The Myth of Hero and Leander: The History and the Reception of an Enduring Greek Legend (2018).