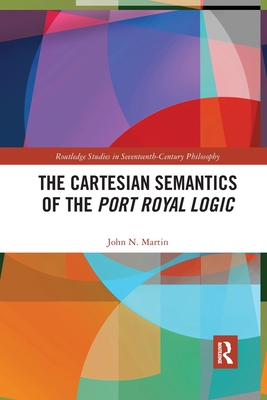 This book sets out for the first time in English and in the terms of modern logic the semantics of the Port Royal Logic (La Logique ou l'Art de penser, 1662-1685) of Antoine Arnauld and Pierre Nicole, perhaps the most influential logic book in the 17th and 18th centuries. Its goal is to explain how the Logic reworks the foundation of pre-Cartesian logic so as to make it compatible with Descartes' metaphysics. The Logic's authors forged a new theory of reference based on the medieval notion of objective being, which is essentially the modern notion of intentional content. Indeed, the book's central aim is to detail how the Logic reoriented semantics so that it centered on the notion of intentional content. This content, which the Logic calls comprehension, consists of an idea's defining modes. Mechanisms are defined in terms of comprehension that rework earlier explanations of central notions like conceptual inclusion, signification, abstraction, idea restriction, sensation, and most importantly within the Logic's metatheory, the concept of idea-extension, which is a new technical concept coined by the Logic. Although Descartes is famous for rejecting Aristotelianism, he says virtually nothing about technical concepts in logic. His followers fill the gap. By putting to use the doctrine of objective being, which had been a relatively minor part of medieval logic, they preserve more central semantic doctrines, especially a correspondence theory of truth. A recurring theme of the book is the degree to which the Logic hews to medieval theory. This interpretation is at odds with what has become a standard reading among French scholars according to which this 16th-century work should be understood as rejecting earlier logic along with Aristotelian metaphysics, and as putting in its place structures more like those of 19th-century class theory.