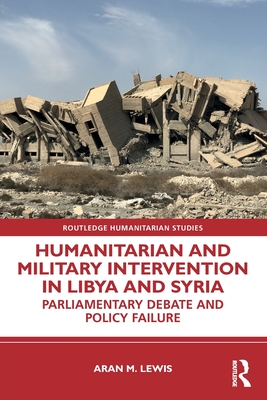 This book explores the contradictions in Britain's humanitarian and military intervention in Libya and Syria, beginning with the Arab Spring in 2010.

The book assesses the contradictions between the expressed humanitarian intentions of British military interveners and the impact of their actions on the putative beneficiary states. It demonstrates that, as a result of foreign intervention, both Libya and Syria were rendered non-functional as unitary nations and suffered extensive harm to their people and infrastructure. To evaluate the effectiveness and credibility of humanitarian warfare, the author conducts a thematic analysis of debates on Libya and Syria in the House of Commons. The book provides a detailed study of intentions and motives expressed by Members of Parliament, of consequent British state actions and their outcomes, and of MPs' reactions to outcomes. This reveals ample evidence of duplicity, insincerity, indifference to harm, and ulterior motives for violence that undermine moral claims and support the argument that, although humanitarian warfare may be possible, the leading Western activist states (Britain, France, and the USA) are poorly qualified to carry it out.

Illustrating a systemic failure of strategy and accountability in British foreign policy, this book will be of interest to scholars and graduates of Humanitarian Studies, International Relations and Military Studies.

Aran M. Lewis is a freelance researcher. This book is based on PhD research by Aran M. Lewis in the School of Law and Social Sciences at London South Bank University, UK