Writers at War: Exploring the Prose of Ford Madox Ford, May Sinclair, Siegfried Sassoon and Mary Borden (Among the Victorians and Modernists) (Hardcover) 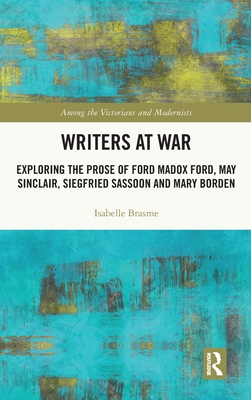 By Isabelle Brasme
$208.00
Unavailable
Not Yet Published

Writers at War addresses the most immediate representations of the First World War in the prose of Ford Madox Ford, May Sinclair, Siegfried Sassoon and Mary Borden; it interrogates the various ways in which these writers contended with conveying their war experience from the temporal and spatial proximity of the warzone and investigates the multifarious impact of the war on the (re)development of their aesthetics. It also interrogates to what extent these texts aligned with or challenged existing social, cultural, philosophical, and aesthetic norms.

While this book is concerned with literary technique, the rich scholarship on questions of gender, trauma, and cultural studies on WWI literature serves as a foundation. This book does not oppose these perspectives but offers a complementary approach based on close critical reading. The distinctiveness of this study stems from its focus on the question of representation and form and on the specific role of the war in the four authors' literary careers. This is the first scholarly work concerned exclusively with theorising writing produced from the immediacy of the war.

This book is intended for academics, researchers, PhD candidates, postgraduates and anyone interested in war literature.