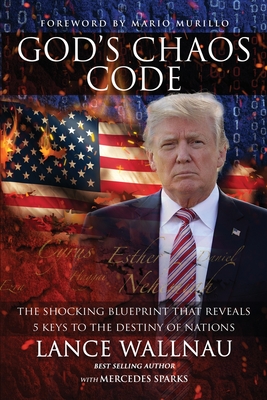 The Ancient Prophetic Code That Reveals The Future Of America And What Is Next For The Nations Of The Earth Chaos is escalating in the world around us; as riots erupt in major cities, liberties are stripped away in the name of public safety, and identity politics divide and enrage the masses. As the chaos intensifies and the world shakes, God is Speaking Could a code from the ancient middle east reveal a global pandemic, pending economic crash, and rise in gun sales? Are these signs that America is under judgement? What if God hid an ancient prophetic code in Scripture that predicts this exact moment in history and what is coming next? Could heaven be unlocking the books of Haggai, Nehemiah, Esther, and Ezra to reveal a pattern for us today? Is it possible that this code is being illuminated now so that you and I can have peace and clarity in the midst of shaking? Prepare to be astonished, shocked, startled, and enlightened. God's Chaos Code unlocks the 2,600-year-old code that predicts the exact crisis we are in and our only way out Lance Wallnau burst onto the scene in 2016 with his national bestselling book, God's Chaos Candidate where he correctly predicted the election of Donald Trump and that Trump would be compared to the biblical King Cyrus. Lance forecast the economic unraveling of 2020 and America's Fourth Turning. As you read his latest book, God's Chaos Code, you will discover Lance's newest prediction: the five keys to the Chaos Code. After you read this, you may never see the world the same.