Fleeting Monuments for the Wall of Respect (Paperback) 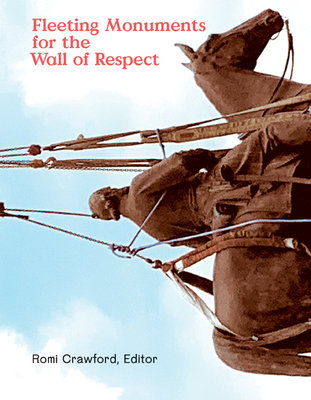 The Wall of Respect, a work of public art created in 1967 at the corner of Forty-third Street and Langley Avenue on Chicago’s South Side, depicted Black leaders in music, literature, politics, and sports. The Wall sparked a nationwide mural movement, provided a platform for community engagement, and was a foundational work of the Black Arts Movement. There is no longer any physical indication of its existence, but it still needs to be remembered. Fleeting Monuments for the Wall of Respect argues against making a monument of it, or of other historically significant events, in the formal language of grandness and permanence. Instead, Romi Crawford proposes the concept of “fleeting monuments,” asking a range of artists and writers to realize antiheroic, nonstatic, and impermanent strategies for commemoration. The result is a collection of “fleeting monuments” of poetry, photography, essays, artworks, and performance that invites readers to enact the history of the Wall of Respect on their own terms. Through the intimate and portable format of a book, Fleeting Monuments for the Wall of Respect recognizes and pays tribute to the Wall while proposing new strategies for commemoration and public memory that inspire us today as we endeavor to preserve the recent murals, installations, and other forms of public art created to support racial justice.

Romi Crawford is professor in the Visual and Critical Studies and Liberal Arts departments at the School of the Art Institute of Chicago. She is coeditor of The Wall of Respect: Public Art and Black Liberation in 1960s Chicago.

"Those who celebrate the mural in Fleeting Moments approach art and community with an openness and an inclusiveness like those who applied paint and posted photographs on the wall in 1967."—Third Coast Review