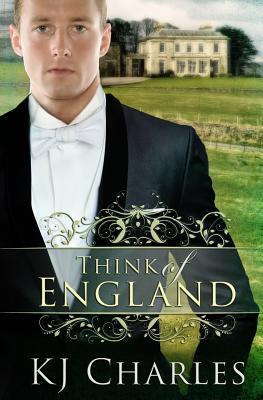 Lie back and think of England...

England, 1904. Two years ago, Captain Archie Curtis lost his friends, fingers, and future to a terrible military accident. Alone, purposeless and angry, Curtis is determined to discover if he and his comrades were the victims of fate, or of sabotage.

Curtis's search takes him to an isolated, ultra-modern country house, where he meets and instantly clashes with fellow guest Daniel da Silva. Effete, decadent, foreign, and all-too-obviously queer, the sophisticated poet is everything the straightforward British officer fears and distrusts.

As events unfold, Curtis realizes that Daniel has his own secret intentions. And there's something else they share-a mounting sexual tension that leaves Curtis reeling.

As the house party's elegant facade cracks to reveal treachery, blackmail and murder, Curtis finds himself needing clever, dark-eyed Daniel as he has never needed a man before...

KJ Charles served twenty years as an editor, mostly in romance and children's fiction. She is now a full time author. She lives in London with her husband, two kids, an out-of-control garden and an increasingly murderous cat. KJ writes mostly romance, frequently historical, and usually with some fantasy or horror in there.