The Beta Male Revolution: Why Many Men Have Totally Lost Interest in Marriage in Today's Society (Paperback) 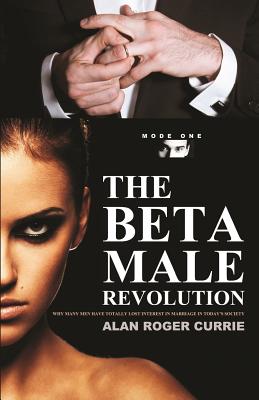 Do men want a female companion who is prudish or one who is free-spirited and kinky?

Do men want a female companion who is monogamy-oriented or one who is promiscuous and/or polyamorous?

Which is more important to women ... a man's sexual prowess? A man's personality and general behavior? A man's level of education, career success, and wealth? Other?

Why do men cheat on their long-term girlfriend or wife even when the woman in his life if faithfully monogamous to him, is a good mother to his children, and generally treats him like he is a King?

Why do women cheat on their long-term boyfriend or husband even when the man in her life provides her with a high quality lifestyle, is a good father to her children, and is faithfully monogamous to her?

Why are so many men and women who are 30 years of age or older avoiding marriage in today's society?

These are the questions that are answered in Author Alan Roger Currie's fourth paperback titled, "The Beta Male Revolution: Why Many Men Have Totally Lost Interest in Marriage in Today's Society"

If you are like many men and women in society who often feel confused and/or frustrated by the seemingly inconsistent, contradictory, dishonest, disingenuous, sexually duplicitous, and highly manipulative behavior exhibited by many members of the opposite sex, this book is definitely for you.

You are guaranteed to have a better understanding of the manner in which the mind of the opposite sex works, and why men and women gravitate toward the type of romantic companions and sexual companions that they do after reading this book. This book will be talked about for years to come.