Black and Blue Sari: The true story of a woman surviving and overcoming years of abuse, torture and fear in her marriage (Paperback) 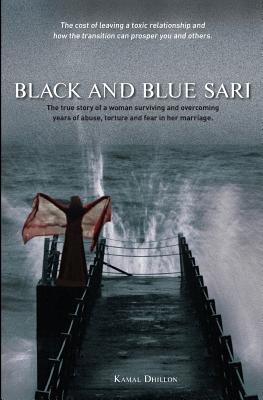 Bloodshed. Confinement. Forced submission. Torture. Rape. Did these atrocities occur in a medieval prison? In a World War Two concentration camp? Was the victim a helpless prisoner of war? No, this suffering and conflict did not take place on a battlefield. For Kamal Dhillon, the battlefield was her home, and the enemy was lying in bed beside her.

Black and Blue Sari is the riveting autobiography of a young girl, traditionally raised in India and married at the age of 18 in Vancouver, Canada. What followed was years of severe and sadistic abuse at the hands of her husband, in both India and Canada. The abuse included beatings, sexual torture, being tied up for long periods of time, being doused with kerosene (and then being given the matches), being hanged, and even being forced to jump into an ocean.

Through it all, Kamal hung on to life because of her four precious children and her dream of what could be. When the sadistic abuse was most severe, fantasizing about a better future became her coping mechanism. Seizing her last chance to escape, she left her husband's family home in India, but without her children. In the midst of her flight, a stranger at an airport heard her cries of despair and shared the gospel of Jesus Christ with her. Entering a personal relationship with Jesus was the first step in a challenging journey that eventually led to Kamal getting her children back, while still experiencing stalking and harassment from her husband. In the end, forgiveness freed her from the despair and fear of the past.

This true story is a testament of a young girl's desire to survive and to not let an abusive husband and his family destroy her. This book is an encouragement for those in the terrible grip of abuse to not give up and to get help. It is also an inspiration for others to not ignore the evil of abuse but to let God work through them to free those suffering such terrible bondage.