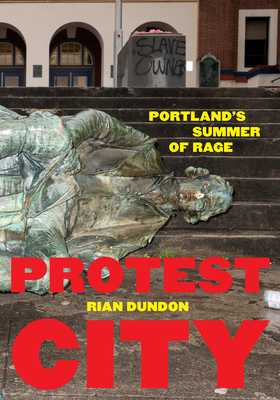 By Rian Dundon, Rian Dundon (By (photographer))
$24.95
Unavailable
Not Yet Published

In the months leading up to the 2020 presidential election, Portland made national news with nightly social justice protests, often met with violent response by counter protestors and law enforcement. Though frequently regarded as a progressive hub, Portland has a long history of racial inequality and oppression, and the city’s entrenched divisions gained new attention during the Trump years. The photographs in Protest City present a visceral visual record of this significant moment in Portland’s history.

Rian Dundon, who has been photographing the rise of extreme politics on the West Coast since 2016, lived only a short walk from the protests that erupted after the murder of George Floyd. For one hundred days, Dundon enmeshed himself in the demonstrations with an unobtrusive point-and-shoot camera. The result is a graphic portrayal of how social movements become politicized, how spectacle serves as a subtext to change in the digital age, and how modern protests blur distinctions among performance, ritual, and surveillance. As he follows the progress of Portland’s conflicts, Dundon draws connections to Oregon’s legacy as a stronghold of white supremacist extremism and interrogates the role of whiteness in racial justice movements.

Dundon’s striking photos recreate the immediacy and impact of the protests, while a foreword by journalist Donnell Alexander and introduction by historian Carmen P. Thompson contextualize the uprising’s sociopolitical background. A chronology and author’s note are also featured.

The publisher and author would like to thank the Magnum Foundation, Documentary Arts, and the Economic Hardship Reporting Project for their generous support of this publication. Additional funding has been provided by Furthermore: a program of the J. M. Kaplan Fund.

RIAN DUNDON is a documentary photographer from Portland, Oregon. He is the author of two previous books, Changsha and Fan. Dundon is a contributing author at the Economic Hardship Reporting Project and has taught documentary photography at the San Francisco Art Institute, University of California, and the International Center of Photography.

CARMEN P. THOMPSON is a historian and expert on race and whiteness in America. She is the author of The Making of American Whiteness: The Formation of Race in Seventeenth- Century Virginia.

DONNELL ALEXANDER is a journalistic storyteller based in Los Angeles. His work has been featured by Time, NPR, Rolling Stone, Al Jazeera's Inside Story, and more.

"Some of the best protest photography made in a long time." -Mother Jones magazine