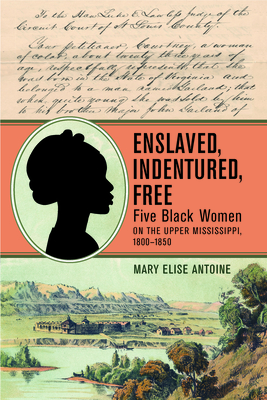 The Northwest Ordinance of 1787 made slavery illegal in the territory that would later become Illinois, Indiana, Michigan, Ohio, Wisconsin, and part of Minnesota. However, many Black individuals’ rights were denied by white enslavers who continued to hold them captive in the territory well into the nineteenth century. Set in this period of American history, Enslaved, Indentured, Free shines a light on five extraordinary Black women—Marianne, Mariah, Patsey, Rachel, and Courtney—whose lives intersected in Prairie du Chien, Wisconsin.

Focusing on these five women, Mary Elise Antoine explores the history of slavery in the Upper Mississippi River Valley, relying on legal documents, military records, court transcripts, and personal correspondence. Whether through perseverance, self-purchase, or freedom suits—including one suit that was used as precedent in Dred and Harriet Scott’s freedom suits years later—each of these women ultimately secured her freedom, thanks in part to the bonds they forged with one another.

Mary Elise Antoine is president of the Prairie du Chien Historical Society and former curator at Villa Louis. She is the author of The War of 1812 in Wisconsin and coeditor, with Lucy Murphy, of Frenchtown Chronicles of Prairie du Chien.