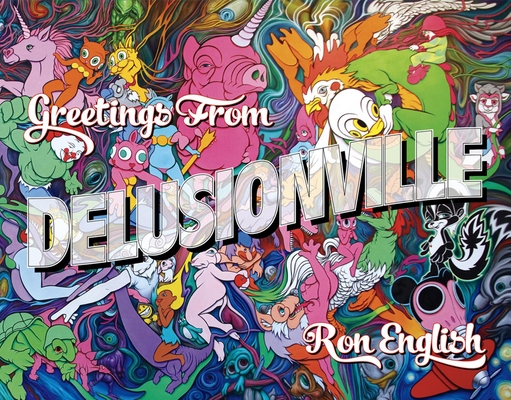 Ron English tells the story of Delusionville, a world where animals have different social status based on their species.

A surreal cast of characters populates this paradise, including buzzards, pigs, sheep, turtles, ducks, wolves, and the rabbbits who are caught in the middle of all the insanity that is Delusionville.

Ronnnie, the main rabbbit, is the only animal who tries to accept all contradictory belief systems, which has driven him completely insane.

A collection of over 100 images set with lyrics. Greetings from Delusionville is a deluxe oversized hardcover coffee table book.

"Rabbbits in Delusionville" is a rock opera that is like post-factual Animal Farm meets Aesop's Fables on LSD.

Delusionville tells the story of a society that formed as different animals fell down a rabbbit hole and created a world with their own mythologies, religion, and politics.

Every animal group represents an embedded archetype in the social structure that is about to come in question. This is largely a commentary on faux news, stagnation of social mobility, and downright delusional thinking.

It is an opera in three acts:

Act One - Introduces all of the characters in Delusionville and brings into question the nature of their society and their various places in the social order.

Act Two - The animals get riled up about the economic disparity and social injustice in their previously unquestioned world of delusion.