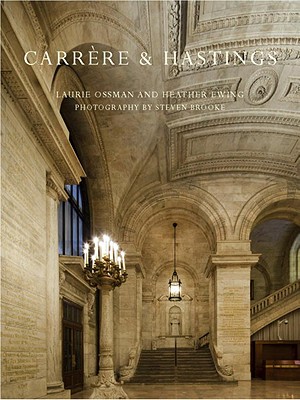 A definitive volume on the storied designers of the Gilded Age. Architects of America's Gilded Age, Carrere and Hastings designed commercial buildings, elaborate residences, and prominent public structures in New York, Washington, London, Paris, Rome, and Havana between 1895 and 1924. Their client list included Carnegie, duPont, Rockefeller, Harriman, Morgan, Gould, Astor, Payne, Whitney, and Vanderbilt. They are revered for Beaux-Arts masterpieces such as the New York Public Library, the Ponce de Leon Hotel in St. Augustine, and the Frick House (now The Frick Collection) in New York, among many others. In addition, they made extensive renovations to the U.S. Capitol, and designed the Senate Office Building, the House Office Building, and the Carnegie Institute in Washington. This sumptuous monograph explores their work with a detailed look at residential, institutional, and commercial works such as the Alfred I. duPont House (now Nemours Mansion) in Delaware; the Flagler House in Palm Beach; and, in New York, the Henry Sloane House (now Lycee Francais), the Public Library, Standard Oil Headquarters, the Neue Galerie, Grand Army Plaza, Bryant Park, and others.

Laurie Ossman is director of the Woodlawn Plantation and Pope-Leighey House in Mount Vernon, Virginia, and author of Great Houses of the South. Heather Ewing is an architectural historian and a research associate of the Smithsonian Institution, and is a coauthor of The Castle, a history of the Institution's first building, and author of The Lost World of James Smithson: Science, Revolution, and the Birth of the Smithsonian. Steven Brooke is a fellow of both the American Academy in Rome and the Albright Institute, Jerusalem. His work has been widely published and exhibited.

"This gorgeous volume shows us a bygone age when creating beauty in the built environment was a main desideratum – and Beaux-Arts scientific rationalism provided the tools for achieving that lofty goal." ~Traditional Buildings