Tucumcari Tonite!: A Story of Railroads, Route 66, and the Waning of a Western Town (Paperback) 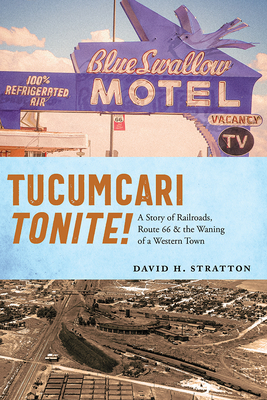 Tucumcari, New Mexico, was founded in 1901 by the Rock Island Railroad and soon had major railroad lines converging there from Chicago, Los Angeles, and Memphis as well as a northern branch line from the Dawson coalfields. The federal highway system established Route 66, the Main Street of America, through the middle of town in 1926. Tucumcari flourished as a tourist mecca, welcoming travelers with its blazing displays of neon lights. But mergers, reorganizations, and financial problems of the railroads, as well as the creation of the interstate highway system that bypassed small places, brought a sharp decline to the once-prosperous town.

Tucumcari Tonite blends in-depth research and personal and family experiences to re-create a memoir of Tucumcari. Drawing on newspapers and government documents as well as business records, personal interviews, and archival holdings, Stratton weaves a poignant tale of a western town's rise and decline--providing a prime example of the destructive forces that have been inflicted on small towns in the West and all across America.