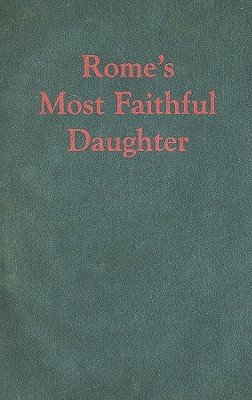 When an independent Poland reappeared on the map of Europe after World War I, it was widely regarded as the most Catholic country on the continent, as “Rome’s Most Faithful Daughter.” All the same, the relations of the Second Polish Republic with the Church—both its representatives inside the country and the Holy See itself—proved far more difficult than expected.

Based on original research in the libraries and depositories of four countries, including recently opened collections in the Vatican Secret Archives, Rome’s Most Faithful Daughter: The Catholic Church and Independent Poland, 1914–1939 presents the first scholarly history of the close but complex political relationship of Poland with the Catholic Church during the interwar period. Neal Pease addresses, for example, the centrality of Poland in the Vatican’s plans to convert the Soviet Union to Catholicism and the curious reluctance of each successive Polish government to play the role assigned to it. He also reveals the complicated story of the relations of Polish Catholicism with Jews, Freemasons, and other minorities within the country and what the response of Pope Pius XII to the Nazi German invasion of Poland in 1939 can tell us about his controversial policies during World War II.

Both authoritative and lively, Rome’s Most Faithful Daughter shows that the tensions generated by the interplay of church and state in Polish public life exerted great influence not only on the history of Poland but also on the wider Catholic world in the era between the wars.

Neal Pease is an associate professor of history at the University of Wisconsin–Milwaukee. He is the author of Poland, the United States, and the Stabilization of Europe, 1919–1933.

“It is impossible to summarize the complex history that unfolds with gripping tension and wonderful detail in Professor Pease’s marvelous book…. Rome’s Most Faithful Daughter is a riveting read that combines an engaging style with academic rigor. It should travel easily beyond the confines of academe and grace the bookshelves of anyone interested in Poland, in the Vatican, in church-state relations, and the ambitions, friendships and rivalries of men and institutions.”—The Cosmopolitan Review

“This excellent book is highly recommended for those interested in the history of Poland, interwar Europe, the Catholic Church, and World War II. It also has important things to say about church-state relations, namely, that even in a country celebrated for its Catholicity, relations between church and state can be complex and troubled.”—Slavic Review

“I have no doubt that this monograph (Rome’s Most Faithful Daughter) is set to become the standard work on the topic.”—Canadian Slavonic Papers

A “subtle and sophisticated scholarly study…. Pease’s study is impressively grounded in archival and printed sources and reflects a mastery of the secondary literature. Very well written, it is an authoritative work that corrects conventional wisdom.”—Church History

“Rome’s Most Faithful Daughter is elegantly written, scrupulously researched, and persuasively argued. Above all, it manages to strike a rare balance while dealing with a topic that is replete with polemical landmines…. This book

“Making clear what actually happened in and to Poland between the wars, Pease provides an insightful contribution to understanding the major issues faced by Europe. Each of the nine chapters is admirably clear, often eloquent, and well informed…. Summing Up: Highly recommended.”
— Choice: Current Reviews for Academic Libraries

“Neal Pease’s minutely researched Rome’s Most Faithful Daughter is not just first-class political history earning its place among the best of the type. It is a detailed recounting of the four-way dance between socialist leader Pilsudski, a Catholic nuncio (Msgr. Achille Ratti, later Pope Pius XI) who liked him and could overlook his peccadillos, a right-wing Polish hierarchy that detested Pilsudski and did not entirely trust Ratti to seek Poland’s best interests, and a Vatican papacy that needed its ‘most faithful daughter’ far more than most people realized…. (A) superbly researched and highly enlightening book.”
— National Catholic Reporter

“Historians and academics will value the substantial amount of information on this fragile time in Poland.”
— Polish American Journal