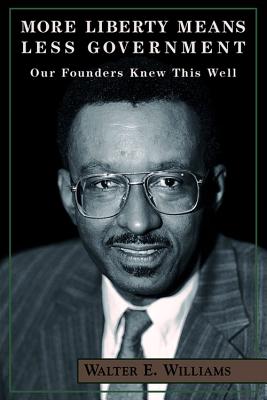 This is book number 453 in the Hoover Institution Press Publication series.

In this new collection of thoughtful, hard-hitting essays, Walter E. Williams once again takes on the left wing's most sacred cows with provocative insights, brutal candor, and an uncompromising reverence for personal liberty and the principles laid out in our Declaration of Independence and Constitution. He challenges the assumptions of contemporary liberalism with ruthless honesty, presenting an impressive array of powerful ideas and substantive information to frame his perspectives on the issues facing America in such critical areas as race, sex, government, law, education, the environment, and international relations. Williams's often controversial views include commentary on

•Women in the Military. "At Parris Island, it was discovered that 45 percent of female Marines were unable to throw a hand grenade far enough to avoid blowing themselves up. If I were in a foxhole with a woman about to toss a hand grenade, I'd consider her the enemy."
•Racial and Gender Quotas. "The only reason the elite haven't mandated quotas for women, Japanese, and other underrepresented groups in the NBA and the NFL is because the folly and costs of their cosmic justice vision would be exposed."
•Affirmative Action. "Too many blacks receive twelve years of fraudulent primary and secondary education that cannot be overcome by four years of college. Unfortunately, liberals and civil rights organizations add to that disaster by giving unquestioned support to a corrupt education establishment that produces the fraud."
•The Americans with Disabilities Act. "In some quarters, the ADA is taken to stand for 'Attorney's Dream Answered.' And who pays? You and I, through higher prices or less convenience."
•The Minimum Wage. "Low wages are more a result of people being underproductive than being underpaid. They simply do not have the skills to produce and do things their fellow man highly values. The minimum wage law is evil legislation and deserving of repeal altogether."

Walter E. Williams is the John M. Olin Distinguished Professor of Economics and chairman of the economics department at George Mason University and a nationally syndicated columnist. Williams is the author of several books and more than sixty articles which have appeared in scholarly journals such as Economic Inquiry, American Economic Review, and Social Science Quarterly and popular publications such as Reader's Digest, Regulation, Policy Review, and Newsweek.