Up from the Projects: An Autobiography (Hoover Institution Press Publication #600) (Paperback) 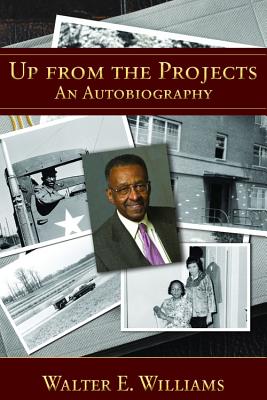 This is book number 600 in the Hoover Institution Press Publication series.

Nationally syndicated columnist and prolific author Walter E. Williams recalls some of the highlights and turning points of his life. From his lower middle class beginnings in a mixed but predominantly black neighborhood in West Philadelphia to his department chair at George Mason University, Williams tells an “only in America” story of a life of achievement.

Williams describes the influences of his early years—such as the teachers who demanded his best efforts and made no excuses for him—and tells how his two years in the army became an important part of his maturation process, in spite of the racism he encountered. He recounts his early time getting established in Los Angeles—getting his B.A., going on to grad school at UCLA, and beginning his teaching career. And he tells how his subsequent move to the Urban Institute in Washington opened his eyes to how decisions are really made in D.C.

When he recounts ultimately accepting his professorship appointment at George Mason University, the author marvels that “I never thought I’d be working there thirty years later.” And throughout the book, Willams refers to the immeasurable contribution of his wife of 48 years, who shared his vision through hard work and love.

Walter E. Williams is the John M. Olin Distinguished Professor of Economics at George Mason University and a nationally syndicated columnist. Williams is the author of several books and more than sixty articles which have appeared in scholarly journals such as Economic Inquiry, American Economic Review, and Social Science Quarterly and popular publications such as Reader's Digest, Regulation, Policy Review, and Newsweek.

"When I finished reading Up from the Projects, I wished it had been a longer book. But it got the job done—and its insights are much needed today."
--Thomas Sowell, the Rose and Milton Friedman Senior Fellow on Public Policy at the Hoover Institution