The Most They Ever Had (Paperback) 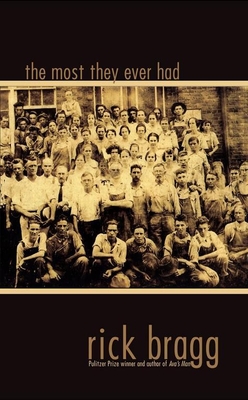 “Pulitzer Prize-winner Rick Bragg has written a powerful account of the lives of the good, hardworking people who were employed in the cotton mill in Jacksonville, Alabama. In giving them the respect and dignity they deserve he reminds us of a set of values and a way of life that defined our country far better than the lust for the deal and fast money. This book is a powerhouse!”
— Deon Stonehouse, Sunriver Books, Sunriver, OR

In the spring of 2001, a community of people in the Appalachian foothills of northern Alabama had come to the edge of all they had ever known. Across the South, padlocks and logging chains bound the doors of silent mills, and it seemed a miracle to blue-collar people in Jacksonville that their mill still bit, shook, and roared. The century-old hardwood floors still trembled under whirling steel, and people worked on, in a mist of white air. The mill had become almost a living thing, rewarding the hardworking and careful with the best payday they ever had, but punishing the careless and clumsy, taking a finger, a hand, more. The mill was here before the automobile, before the flying machine, and the mill workers served it even as it filled their lungs with lint and shortened their lives. In return, it let them live in stiff-necked dignity in the hills of their fathers. So, when death did come, no one had to ship their bodies home on a train. This is a mill story—not of bricks, steel, and cotton, but of the people who suffered it to live.

Rick Bragg is the author of five books including the bestsellers All Over but the Shoutin’, Ava’s Man, and The Prince of Frogtown. He was born and raised on the outskirts of Jacksonville, Alabama, the mill town that is the subject of this book. A newspaper and magazine writer who was awarded the Pulitzer Prize in 1996, Bragg is currently a professor of writing at The University of Alabama.

“It is hard to think of a writer who reminds us more forcefully and wonderfully of what people and families are all about.”
—New York Times Book Review

“[Bragg has] a true gift for great storytelling, the kind . . . that makes you think it’s just a plain old story, until he gets to the end and you’re either weeping or covered with goosebumps.”
—New Orleans Times-Picayune