Mr. Putin: Operative in the Kremlin (Geopolitics in the 21st Century) (Paperback) 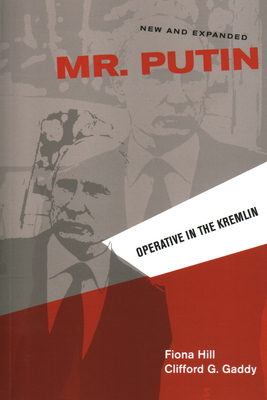 Fiona Hill and other U.S. public servants have been recognized as Guardians of the Year in TIME's 2019 Person of the Year issue.

From the KGB to the Kremlin: a multidimensional portrait of the man at war with the West.

Where do Vladimir Putin's ideas come from? How does he look at the outside world? What does he want, and how far is he willing to go?

The great lesson of the outbreak of World War I in 1914 was the danger of misreading the statements, actions, and intentions of the adversary. Today, Vladimir Putin has become the greatest challenge to European security and the global world order in decades. Russia's 8,000 nuclear weapons underscore the huge risks of not understanding who Putin is.

Featuring five new chapters, this new edition dispels potentially dangerous misconceptions about Putin and offers a clear-eyed look at his objectives. It presents Putin as a reflection of deeply ingrained Russian ways of thinking as well as his unique personal background and experience.

Praise for the first edition:

"If you want to begin to understand Russia today, read this book."--Sir John Scarlett, former chief of the British Secret Intelligence Service (MI6)

"For anyone wishing to understand Russia's evolution since the breakup of the Soviet Union and its trajectory since then, the book you hold in your hand is an essential guide."--John McLaughlin, former deputy director of U.S. Central Intelligence

"Of the many biographies of Vladimir Putin that have appeared in recent years, this one is the most useful."--Foreign Affairs

"This is not just another Putin biography. It is a psychological portrait."--The Financial Times

Q: Do you have time to read books? If so, which ones would you recommend? "My goodness, let's see. There's Mr. Putin, by Fiona Hill and Clifford Gaddy. Insightful."--Vice President Joseph Biden in Joe Biden: The Rolling Stone Interview.