The Rise of Viagra: How the Little Blue Pill Changed Sex in America (Sociology) (Paperback) 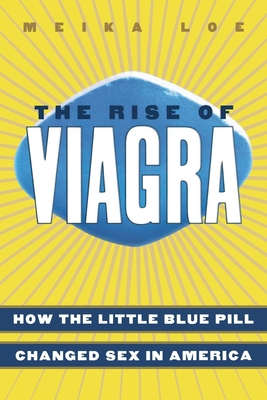 Since its introduction in 1998, Viagra has launched a new kind of sexual revolution. Quickly becoming one of the most sought after drugs in history, the little blue pill created a sea change within the pharmaceutical industry--from how drugs could be marketed to the types of drugs put into development--as well as the culture at large. Impotency is no longer an embarrassing male secret; now it is called "erectile dysfunction," and is simply something to "ask your doctor" about. And over 16 million men have. The Rise of Viagra is the first book to detail the history and the vast social implications of the Viagra phenomenon. Meika Loe argues that Viagra has changed what qualifies as normal sex in America. In the quick-fix, pill-for-everything culture that Viagra helped to create, erections can now be had by popping a pill, making sex on demand, regardless of age or infirmity, and, potentially, for the rest of one's life. Drawing on interviews with men who take the drug, their wives, doctors and pharmacists as well as scientists and researchers in the field, this fascinating account provides an intimate history of the drug's effect on America. Loe also examines the quest for the female Viagra, the impact of the drug around the world, the introduction of new erection drugs, like Levitra and Cialis, and the rapid growth of the multi-billion dollar pharmaceutical industry. This wide-ranging book explains how this medical breakthrough and cultural phenomenon have forever changed the meaning of sex in America.

Meika Loe is Assistant Professor of Sociology and Women's Studies at Colgate University.