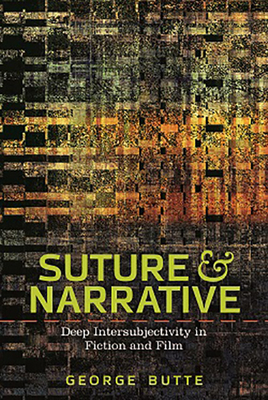 Suture and Narrative: Deep Intersubjectivity in Fiction and Film by George Butte offers a new phenomenological understanding of how fiction and film narratives use particular techniques to create and represent the experience of community. Butte turns to the concept of suture from Lacanian film theory and to the work of Merleau-Ponty to contribute a deeper and broader approach to intersubjectivity for the field of narrative theory.

Butte’s approach allows for narratives that represent insight as well as blindness, love, and loss, locating these connections and disconnections in narratological techniques that capture the crisscrossing of perspectives, such as those in fiction’s free indirect discourse and in the oblique angle of film’s shot/reverse shot convention. Butte studies the implications of this chiasmus in the novels and film adaptations of later Henry James works, Barrie’s Peter Pan tales and film adaptations, and the films Silence of the Lambsand Nothing But a Man. Suture’s story in the twentieth century, according to Butte, is a story of the loss of immediacy and community. Yet in concluding this, Butte finds optimism in the Coen brothers’ Raising Arizona as well as in Why Be Happy When You Could Be Normal? by Jeanette Winterson and Marc Webb’s film (500) Days of Summer.

George Butte is Professor of English and Film Studies at Colorado College and is the author of I Know That You Know That I Know: Narrating Subjects from Moll Flanders to Marnie (OSUP 2004).

“Suture and Narrative is a theoretically bracing, deeply learned, and wonderfully illuminating work that makes an important contribution both to narratology and film theory. The major innovation of this new book is to bring the vocabulary and insights not only of phenomenology but also of film theory—in particular, the concept of cinematic editing as ‘suture’—together with those of narratology. This is a passionate and provocative study that will make for an excellent addition to the Theory and Interpretation of Narrative series.” —Susan Fraiman, University of Virginia

“This bouquet of essays assembles the best work of an international collaborative inquiry into how cultures narrate themselves. Once you understand the concept of seriality, the world will never look the same, from mitosis and planetary rotation to comics and television shows. This volume ranges across the variegated forms of popular culture of the last two centuries, casting searchlights into serial nooks and crannies.” —John Durham Peters, author of The Marvelous Clouds: Toward a Philosophy of Elemental Media

“Media of Serial Narrative is a necessary and exciting anthology in any study of contemporary storytelling.” —Linda Williams, author of Playing the Race Card: Melodramas of Black and White from Uncle Tom to O. J. Simpson and On The Wire