Patriots, Prostitutes, and Spies: Women and the Mexican-American War (Hardcover) 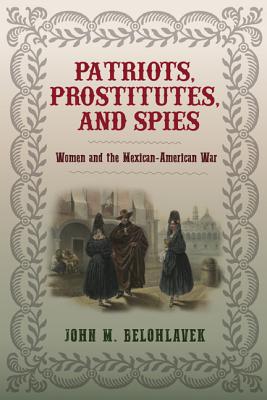 In Patriots, Prostitutes, and Spies, John M. Belohlavek tells the story of women on both sides of the Mexican-American War (1846-48) as they were propelled by the bloody conflict to adopt new roles and expand traditional ones.

American women "back home" functioned as anti-war activists, pro-war supporters, and pioneering female journalists. Others moved west and established their own reputations for courage and determination in dusty border towns or bordellos.

Women formed a critical component of the popular culture of the period, as trendy theatrical and musical performances drew audiences eager to witness tales of derring-do, while contemporary novels, in tales resplendent with heroism and the promise of love fulfilled, painted a romanticized picture of encounters between Yankee soldiers and fair Mexican senoritas.

Belohlavek juxtaposes these romantic dreams with the reality in Mexico, which included sexual assault, women soldaderas marching with men to provide critical supportive services, and the challenges and courage of working women off the battlefield. In all, Belohlavek shows the critical roles played by women, real and imagined, on both sides of this controversial war of American imperial expansion.

John M. Belohlavek, Professor of History at the University of South Florida, is the author of numerous books, including Broken Glass: Caleb Cushing and the Shattering of the Union.