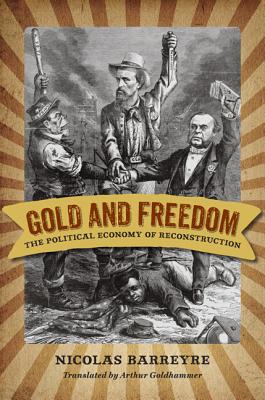 Historians have long treated Reconstruction primarily as a southern concern isolated from broader national political developments. Yet at its core, Reconstruction was a battle for the legacy of the Civil War that would determine the political fate not only of the South but of the nation.

In Gold and Freedom, Nicolas Barreyre recovers the story of how economic issues became central to American politics after the war. The idea that a financial debate was as important for Reconstruction as emancipation may seem remarkable, but the war created economic issues that all Americans, not just southerners, had to grapple with, including a huge debt, an inconvertible paper currency, high taxation, and tariffs. Alongside the key issues of race and citizenship, the struggle with the new economic model and the type of society it created pervaded the entire country. Both were legacies of war. Both were fought over by the same citizens in a newly reunited nation. It was thus impossible for such closely related debates to proceed independently.

A truly groundbreaking work, Gold and Freedom shows how much the fate of Reconstruction--and the political world it ultimately created--owed to northern sectional divisions, revealing important links between race and economy, as well as region and nation, not previously recognized.