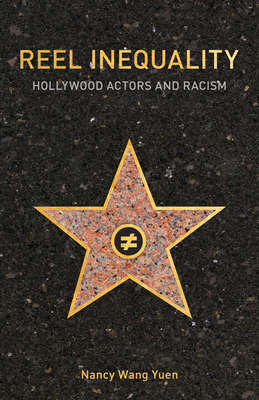 When the 2016 Oscar acting nominations all went to whites for the second consecutive year, #OscarsSoWhite became a trending topic. Yet these enduring racial biases afflict not only the Academy Awards, but also Hollywood as a whole. Why do actors of color, despite exhibiting talent and bankability, continue to lag behind white actors in presence and prominence?  Reel Inequality examines the structural barriers minority actors face in Hollywood, while shedding light on how they survive in a racist industry. The book charts how white male gatekeepers dominate Hollywood, breeding a culture of ethnocentric storytelling and casting. Nancy Wang Yuen interviewed nearly a hundred working actors and drew on published interviews with celebrities, such as Viola Davis, Chris Rock, Gina Rodriguez, Oscar Isaac, Lucy Liu, and Ken Jeong, to explore how racial stereotypes categorize and constrain actors. Their stories reveal the day-to-day racism actors of color experience in talent agents’ offices, at auditions, and on sets. Yuen also exposes sexist hiring and programming practices, highlighting the structural inequalities that actors of color, particularly women, continue to face in Hollywood.
This book not only conveys the harsh realities of racial inequality in Hollywood, but also provides vital insights from actors who have succeeded on their own terms, whether by sidestepping the system or subverting it from within. Considering how their struggles impact real-world attitudes about race and diversity, Reel Inequality follows actors of color as they suffer, strive, and thrive in Hollywood.

NANCY WANG YUEN is an associate professor of sociology at Biola University in La Mirada, California.

"Anyone who is interested in who is 'in the room where it happens' and who is left out will applaud this thoughtful treatise."
— Booklist

"The rainbow is not mono-chromatic. Nancy Yuen's excellent study illuminates the embedded cultural and economic system known as Hollywood where Asian Americans and others aspire to and work to be included."
— Clyde Kusatsu

“With laser-like accuracy, Reel Inequality dissects Hollywood’s colorblind racism and reveals why the struggle for increased diversity in TV and film has been such a long and frustrating one."
— Darnell Hunt

"Reel Inequality highlights the institutionalized racism and implicit bias actors from various ethnic and cultural backgrounds experience while trying to work professionally in Hollywood. Yuen offers empowering recommendations for effecting change within and outside of the industry."
— Monica White Ndounou

Nancy Wang Yuen points out in Reel Inequality: Hollywood Actors and Racism, that actors of color generally have fewer acting opportunities, all as a result of the homogeneity of the directors’ chairs and writers’ rooms of Hollywood. Her study found that 77 percent of casting calls specify a white actor. Her book is filled with other firsthand accounts from anonymous Hollywood sources that seem to reinforce the sad truth that a mostly white industry is going to advance the interest of mostly white actors. In one interview, a Latina actor told Yuen that a casting director friend asked for her opinion on a Latino casting decision, since the director only knew “maids and gardeners” who were Latino.

Sociologist and author of Reel Inequality, Nancy Wang Yuen was recently quoted in an excellent Paste magazine piece on whitewashing in Hollywood. One casting director told Yuen: “I work with a lot of different people, and Asians are a challenge to cast because most casting directors feel as though they’re not very expressive. They’re very shut down in their emotions…” As the quote began to percolate around Twitter, other people were understandably angry too, and it led to Maurene Goo starting the hashtag #ExpressiveAsians. It received an excellent response… Yuen was certainly pleased with the reaction. Speaking on the hashtag, Yuen told indy100 that "social media is amplifying previously unheard voices - providing a platform for marginalised folks and allies to protest issues like whitewashing, stereotyping, and other exclusionary practices that have gone unchecked in Hollywood for too long."
— Josh Withey

Social media is not happy about a quote regarding Asian-American actors not being expressive enough. At the heart of the controversy is a story told by Nancy Wang Yuen, sociologist and author of the book "Reel Inequality: Hollywood Actors and Racism." In the book, published last year, Yuen quoted an unnamed casting director who provided an explanation behind the challenges of casting Asian actors. "Asians are a challenge to cast because most casting directors feel as though they're not very expressive," the casting director said...

The quote stirred a backlash on Twitter, with some taking the opportunity to show just how expressive Asian-Americans can be... The discussion comes at a time of increased criticism of Hollywood for "whitewashing" or casting white actors in roles where the characters are another race.

"If there is one thing Yuen unequivocally does, it is showing that Hollywood has to work hard to Do the Right Thing."
— Cultural Sociology

"The Cultural Truth at the Heart of the Lies in ‘The Farewell’" by Brian X. Chen
https://www.nytimes.com/2019/07/24/movies/the-farewell-family-lies.html
— New York Times

“Reel Inequality provides a vital critique of the entertainment industry’s discrimination in the context of its far-reaching influence…. Yuen provides clear ways that the industry can move forward, if enough of its stakeholders choose to take action.”

— Journal of Cinema and Media Studies