Food on the Page: Cookbooks and American Culture (Hardcover) 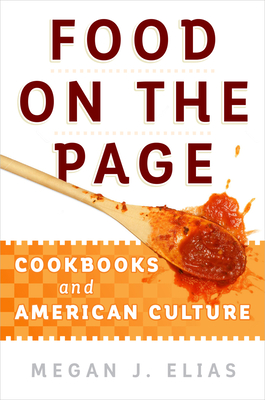 What is American food? From barbecue to Jell-O molds to burrito bowls, its history spans a vast patchwork of traditions, crazes, and quirks. A close look at these foods and the recipes behind them unearths a vivid map of American foodways: how Americans thought about food, how they described it, and what foods were in and out of style at different times.

In Food on the Page, the first comprehensive history of American cookbooks, Megan J. Elias chronicles cookbook publishing from the early 1800s to the present day. Following food writing through trends such as the Southern nostalgia that emerged in the late nineteenth century, the Francophilia of the 1940s, countercultural cooking in the 1970s, and today's cult of locally sourced ingredients, she reveals that what we read about food influences us just as much as what we taste. Examining a wealth of fascinating archival material--and rediscovering several all-American culinary delicacies and oddities in the process--Elias explores the role words play in the creation of taste on both a personal and a national level. From Fannie Farmer to The Joy of Cooking to food blogs, she argues, American cookbook writers have commented on national cuisine while tempting their readers to the table. By taking cookbooks seriously as a genre and by tracing their genealogy, Food on the Page explains where contemporary assumptions about American food came from and where they might lead.

Megan J. Elias is Associate Professor of the Practice and Faculty Coordinator in Gastronomy at Boston University. She is the author of numerous books, including Stir It Up: Home Economics in American Culture, also available from the University of Pennsylvania Press.