Pierre Macherey and the Case of Literary Production (Paperback) 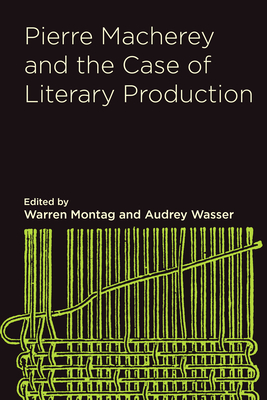 This collection revisits A Theory of Literary Production (1966) to show how Pierre Macherey’s remarkable—and still provocative—early work can contribute to contemporary discussions about the act of reading and the politics of formal analysis. Across a series of historically and philosophically contextualized readings, the volume’s contributors interrogate Macherey’s work on a range of pressing issues, including the development of a theory of reading and criticism, the relationship between the spoken and the unspoken, the labor of poetic determination and of literature’s resistance to ideological context, the literary relevance of a Spinozist materialism, the process of racial subjectification and the ontology of Blackness, and a theorization of the textual surface. Pierre Macherey and the Case of Literary Production also includes three new texts by Macherey, presented here in English for the first time: his postface to the revised French edition of A Theory of Literary Production; “Reading Althusser,” in which Macherey analyzes the concept of symptomatic reading; and a comprehensive interview in which Macherey reflects on the historical conditions of his early work, the long arc of his career at the intersection of philosophy and literature, and the ongoing importance of Louis Althusser’s thought.

Recent translations of Macherey’s work into English have introduced new readers to the critic’s enduring power and originality. Timely in its questions and teeming with fresh insights, Pierre Macherey and the Case of Literary Production demonstrates the depths to which his work resonates, now more than ever.

WARREN MONTAG is the Louis M. Brown Family Professor of Literature at Occidental College. His most recent books include Althusser and His Contemporaries and The Other Adam Smith. Montag is the editor of Décalages and the translator of Étienne Balibar’s Identity and Difference: John Locke and the Invention of Consciousness.

AUDREY WASSER is an associate professor of French at Miami University, Ohio. She is the author of The Work of Difference: Modernism, Romanticism, and the Production of Literary Form.

“With its exquisitely written preface and stimulating contributions by Macherey and other scholars, this collection brings long-overdue attention to the neglected and misunderstood elements of Macherey’s work, making that work a timely rejoinder to debates on a range of vital issues: reading and discursivity, the relationship between literature and philosophy, the politics of form and formalism, and the legacy of the Althusserian project. At a time when anti-intellectualism holds thought in its sway, in academe as elsewhere, the interventionist import of this volume cannot be overstated.” —Rey Chow, author of A Face Drawn in Sand: Humanistic Inquiry and Foucault in the Present

“Bringing together a stellar cast of writers and scholars, this collection offers a most eloquent testimony to the lasting enigma of Pierre Macherey’s brilliant if also frequently misread first book, A Theory of Literary Production. Audrey Wasser and Warren Montag prove the continued relevance of Macherey’s proposal in the context of French Marxism and its creative dialogue with psychoanalysis, the history of the sciences, and the critique of ideology.” —Bruno Bosteels, author of The Actuality of Communism