The Letters and the Law: Legal and Literary Culture in Late Imperial Russia (Studies in Russian Literature and Theory) (Hardcover) 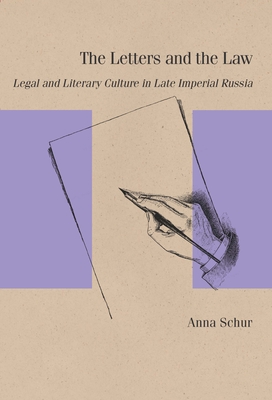 The Letters and the Law explores the fraught relationship between writers and lawyers in the four decades following Alexander II’s judicial reforms. Nineteenth-century Russian literature abounds in negative images of lawyers and the law. Literary scholars have typically interpreted these representations either as the common, cross‑cultural critique of lawyerly unscrupulousness and greed or as an expression of Russian hostility toward Western legalism, seen as antithetical to traditional Russian values. The Letters and the Law is the first book to frame the conflict in terms of the two professions’ competition for cultural authority.

Anna Schur combines historical research and literary analysis to argue that the first generations of Russian trial lawyers shaped their professional identity with an eye to the celebrated figure of the writer and that they considered their own activities to be a form of verbal art. A fuller understanding of writers’ antipathy to the law, Schur contends, must take into account this overlooked cultural backdrop. Laced with the better‑known critique of the lawyer’s legalistic proclivities and lack of moral principle are the writer’s reactions to a whole network of explicit and implicit claims of similarity between the two professions’ goals, methods, and missions that were central to the lawyer’s professional ideal. Viewed in this light, writers’ critiques of the law and lawyers emerge as a concerted effort at protecting literature’s exclusive cultural status in the context of modernization and the rapidly expanding public sphere.

The study draws upon a mix of well-known and rarely studied nineteenth-century authors and texts—with particular attention paid to Fyodor Dostoevsky and Mikhail Saltykov-Shchedrin—and on a wide range of nonliterary sources, including courtroom speeches, guides to forensic oratory, legal treatises, and specialized press.

ANNA SCHUR is a professor of English at Keene State College in New Hampshire. She is the author of Wages of Evil: Dostoevsky and Punishment (Northwestern University Press).

“Schur’s exceptional, pathbreaking, and deeply scholarly book joins a group of recent studies interrogating the relationship between literature and the law, and argues that the writer and the lawyer evolved from being early allies to becoming, in the public’s view, the proverbial farmer and cowboy, a trend against which Russian trial lawyers, in particular, struggled to contend. Schur’s fascinating, penetrating analysis renders her book essential reading for both Slavists and students of the law and literature more generally. Read it! It’s a game changer.” —Robin Feuer Miller, author of Dostoevsky’s Unfinished Journey

“. . . a major contribution to both the history and the literary understanding of the time.” —Richard S. Wortman, author of The Power of Language and Rhetoric in Russian Political History: Charismatic Words from the 18th to the 21st Centuries

“Russia’s tsarist-era judicial reforms gave rise to lawyers whose courtroom eloquence and literary accomplishments ought to have been a source of national pride, but that is not what happened. Anna Schur goes deeply and skillfully into the source material to explain the surprisingly negative reaction expressed by Dostoevsky, Tolstoy, Saltykov, and other writers towards lawyers who tried to realize Russian literature’s dream of a more just world.” —Kathleen Parthé, author of Russia’s Dangerous Texts: Politics Between the Lines