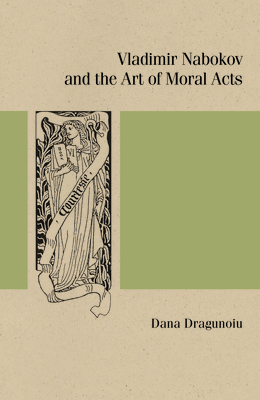 This book shows how ethics and aesthetics interact in the works of one of the most celebrated literary stylists of the twentieth century: the Russian American novelist Vladimir Nabokov. Dana Dragunoiu reads Nabokov’s fictional worlds as battlegrounds between an autonomous will and heteronomous passions, demonstrating Nabokov’s insistence that genuinely moral acts occur when the will triumphs over the passions by answering the call of duty.

Dragunoiu puts Nabokov’s novels into dialogue with the work of writers such as Alexander Pushkin, William Shakespeare, Leo Tolstoy, and Marcel Proust; with Kantian moral philosophy; with the institution of the modern duel of honor; and with the European traditions of chivalric literature that Nabokov studied as an undergraduate at Cambridge University. This configuration of literary influences and philosophical contexts allows Dragunoiu to advance an original and provocative argument about the formation, career, and legacies of an author who viewed moral activity as an art, and for whom artistic and moral acts served as testaments to the freedom of the will.

DANA DRAGUNOIU is an associate professor in the Department of English Language and Literature and the Institute of European, Russian, and Eurasian Studies at Carleton University in Ontario. She is the author of Vladimir Nabokov and the Poetics of Liberalism, published by Northwestern University Press.

“This erudite and important book welcomes controversy and courts paradox in approaching Nabokov’s ethics as a Kantian artistic practice that elevates the concept of autonomous will over notions of love and pity. Having discovered the fountainhead of the Nabokovian ‘art of moral acts’ in Arthurian literature and its key principle of chivalric courtesy, Dragunoiu matches Nabokov’s moral philosophy against the ethical ideas of Pushkin, Shakespeare, Proust, and Tolstoy, while skillfully dismantling well-established critical perceptions of the master’s oeuvre, from Mary and The Defense to Pale Fire and Ada.” —Olga Voronina, coeditor and cotranslator of Letters to Véra by Vladimir Nabokov

"In this book, Dana Dragunoiu offers readers a fresh lens through which to view Nabokov's works.  The lens of courtesy, it turns out, opens onto a cascade of fascinating perspectives on what drives the deepest ethical concerns in Nabokov's works, and how they relate to those same concerns in the authors and philosophers he loved most.  Dragunoiu presents us with a completely fresh, ethically bracing Nabokov. This is a book that produces the ever-coveted tingles in the spine, usually reserved by Nabokov only for the highest art." —Stephen H. Blackwell, coeditor of Fine Lines: Vladimir Nabokov's Scientific Art

“Contrary to the prevailing perception of Nabokov as a cold art-for-art’s-sake aesthete, Dana Dragunoiu enriches us with a nuanced portrait of an artist who saw a direct connection between esthetical and moral, ethical and artistic. Dragunoiu convincingly argues that Nabokov is, therefore, strikingly Kantian, sharing with the philosopher the profoundly humanistic notion that ‘the beautiful is the symbol of the morally good.’” —Galya Diment, author of Pniniad: Vladimir Nabokov and Marc Szeftel

“By reading Nabokov’s works in the context of the principles of cortezia and those of non-consequentialist moral philosophy, this erudite, well researched, and thought-suffused study unlocks a new axiological dimension of Nabokov’s art.” —Leona Toker, author of Nabokov: The Mystery of Literary Structures

“Dragunoiu has taken a fascinating approach to the reading and interpretation of Nabokov’s art, and her study is both lucidly written and cogently argued. Her monograph acknowledges the extensive scholarship that exists on Nabokov, but she extends, expands upon, and departs from this body of work in remarkable and productive ways.” —Julian Connolly, author of A Reader’s Guide to Nabokov’s “Lolita”

“[A] welcome addition to scholarship on the moral foundations of Nabokov’s works.” —K. Rosneck, University of Wisconsin-Madison, CHOICE