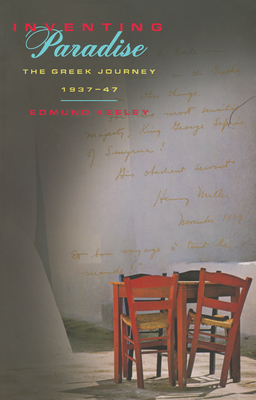 In the looming shadow of dictatorship and imminent war, George Seferis and George Katsimbalis welcomed Henry Miller and Lawrence Durrell to their homeland. Together, as they spent evenings in tavernas, explored the Peloponnese, and considered the meaning of Greek life and freedom and art, they seemed to be inventing paradise. This blend of memoir, criticism, and storytelling takes readers on a journey into the poetry, friendships, and politics of an extraordinary time.

Edmund Keeley is the Charles Barnwell Straut Professor of English Emeritus at Princeton University, where he served for some years as the director of the Creative Writing Program and of the Program in Hellenic Studies. The author of novels, poetry, and works of nonfiction, including Cavafy's Alexandria, he is also the noted translator of many important modern Greek poets; his translations of poetry earned him the Harold Morton Landon Award from the Academy of American Poets. In 1999 he received an Award in Literature from the American Academy of Arts and Letters.

"Writing of past and present, of Miller and Seferis, of Seferis and the gods and, occasionally, of himself and Seferis, Professor Keeley has made a complex and illuminating connection."
--Richard Eder, New York Times


"In this masterly weave of scholarship and personal experience, Keeley, a renowned translator of modern Greek poetry, uses letters, journals, and poems, and his own lucid prose to recreate the world of Miller's 'little band of friends' and track them through the war."
--New Yorker