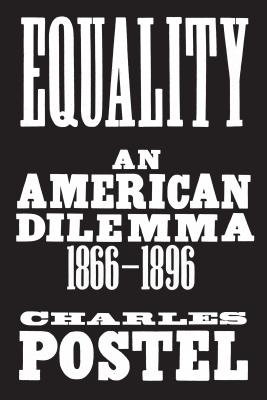 The Civil War unleashed a torrent of claims for equality—in the chaotic years following the war, former slaves, women’s rights activists, farmhands, and factory workers all engaged in the pursuit of the meaning of equality in America. This contest resulted in experiments in collective action, as millions joined leagues and unions. In Equality: An American Dilemma, 1866–1886, Charles Postel demonstrates how taking stock of these movements forces us to rethink some of the central myths of American history.

Despite a nationwide push for equality, egalitarian impulses oftentimes clashed with one another. These dynamics get to the heart of the great paradox of the fifty years following the Civil War and of American history at large: Waves of agricultural, labor, and women’s rights movements were accompanied by the deepening of racial discrimination and oppression. Herculean efforts to overcome the economic inequality of the first Gilded Age and the sexual inequality of the late-Victorian social order emerged alongside Native American dispossession, Chinese exclusion, Jim Crow segregation, and lynch law.

Now, as Postel argues, the twenty-first century has ushered in a second Gilded Age of savage socioeconomic inequalities. Convincing and learned, Equality explores the roots of these social fissures and speaks urgently to the need for expansive strides toward equality to meet our contemporary crisis.

"A lucid, thoroughly researched account . . . [Postel] breaks new ground . . . Equality reminds us of a homegrown radical heritage that critics of today's deeply unequal America can be inspired by and must improve upon." --Eric Foner, The Nation

"An expansive portrait of the post-Civil War U.S. . . . Postel has written an intelligent plea for 'a just and equal society.'” --Kevin Canfield, San Francisco Chronicle

"A lucid and deeply researched investigation of three of the post-Civil War era's most powerful social reform movements and their charismatic leaders." --Library Journal

"A closely argued account of how various constituencies . . . vied for a place at the table in the reunited republic . . . Postel has a keen eye for unlikely juxtapositions . . . [Equality is] of much use in understanding the course of late-19th-Century American history, a time of turmoil that resembles our own." --Kirkus

"Americans today are torn by the fierce politics of inequality, but not for the first time in our history. Charles Postel's urgent yet subtle account of the first American Gilded Age ought to be required reading for understanding the nation's long egalitarian tradition, with lessons for confronting our second Gilded Age." —Sean Wilentz, author of The Rise of American Democracy and the Sidney and Ruth Lapidus Professor of the American Revolutionary Era at Princeton University

"We live in a new Gilded Age, Americans often hear, a time of soaring wealth for a few and growing inequality for many. Charles Postel helps us understand the first Gilded Age, when those problems were met with unprecedented organizing and mobilizing by Americans who felt themselves dispossessed and disfranchised. In his sweeping, engaged, and humane account, Postel shows the accomplishments and failures of the efforts by working people, farmers, and women to reorient the United States toward greater justice and equality." —Edward Ayers, author of America on the Eve of the Civil War and the Tucker-Boatwright Professor of the Humanities and President Emeritus at the University of Richmond

"With impeccable scholarship and brilliant narration, Charles Postel has rewritten the history of post-Civil War social movements. Racial exclusion, he shows, was the Achilles' heel of many them despite their commitment to economic democracy. This book is both timely and required reading for anyone interested in the problem of equality today." --Manisha Sinha, author of The Slaver's Cause and the James L. and Shirley A. Draper Chair in American History at the University of Connecticut

“Perfectly timed to help us understand the historical roots of inequalities that plague our society today, Charles Postel’s Equality is also a compelling and elegant interpretation of how those inequalities emerged during the watershed of American history—when struggles for equality shaped modern America after the Civil War. An enduring achievement.” —Kathryn Kish Sklar, author of Florence Kelley and the Nation’s Work and Distinguished Professor of History at the State University of New York, Binghamton

“This brilliant and beautifully researched story about white supremacy in American politics reveals the depth of its entanglement with our egalitarian traditions. Postel’s new book is innovative, persuasive, and crushingly timely.” —Robin L. Einhorn, author of American Taxation, American Slavery and the Preston Hotchkis Professor in the History of the United States at UC Berkeley

“Charles Postel's Equality is a brilliant reinterpretation of the egalitarian social movements that swept the United States during the decades following the Civil War. No other historian has more skillfully explored the economic, racial, and sexual tensions that pervaded these struggles for equality and that persist to the present. After Postel's scrutiny, the first Gilded Age will never look the same. Neither will the second--the one we now inhabit.” —Jackson Lears, author of Rebirth of a Nation, The Making of Modern America and the Board of Governors Distinguished Professor of History at Rutgers University

“Equality is a deeply researched, beautifully written, and brilliantly argued history of the epic struggle to define the meaning of equality in post-Civil War America. This magnificent portrait of the farmer’s Grange, the Woman’s Christian Temperance Union, and the Knights of Labor is filled with fresh insights into the social movements that took root during Reconstruction and blossomed in the Gilded Age. Confronting some of the most difficult questions in American history, Postel adds new dimensions to our understanding of the racial, gender, and class inequalities that continue to shape our social and political landscape.” —Crystal N. Feimster, author of Southern Horrors: Women and the Politics of Rape and Lynching and Associate Professor of African American Studies at Yale University