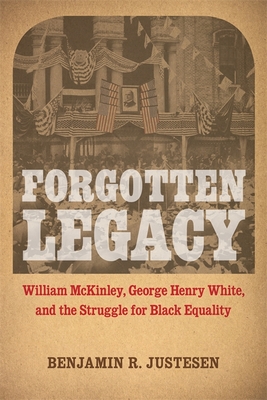 In Forgotten Legacy, Benjamin R. Justesen reveals a previously unexamined facet of William McKinley's presidency: an ongoing dedication to the advancement of African Americans, including their appointment to significant roles in the federal government and the safeguarding of their rights as U.S. citizens. During the first two years of his administration, McKinley named nearly as many African Americans to federal office as all his predecessors combined. He also acted on many fronts to stiffen federal penalties for participation in lynch mobs and to support measures promoting racial tolerance. Indeed, Justesen's work suggests that McKinley might well be considered the first "civil rights president," especially when compared to his next five successors in office. Nonetheless, historians have long minimized, trivialized, or overlooked McKinley's cooperative relationships with prominent African American leaders, including George Henry White, the nation's only black congressman between 1897 and 1901.

Justesen contends that this conventional, one-sided portrait of McKinley is at best incomplete and misleading, and often severely distorts the historical record. A Civil War veteran and the child of abolitionist parents, the twenty-fifth president committed himself to advocating for equity for America's black citizens. Justesen uses White's parallel efforts in and outside of Congress as the primary lens through which to view the McKinley administration's accomplishments in racial advancement. He focuses on McKinley's regular meetings with a small and mostly unheralded group of African American advisers and his enduring relationship with leaders of the new National Afro-American Council. His nomination of black U.S. postmasters, consuls, midlevel agency appointees, military officers, and some high-level officials--including U.S. ministers to Haiti and Liberia--serves as perhaps the most visible example of the president's work in this area. Only months before his assassination in 1901, McKinley toured the South, visiting African American colleges to praise black achievements and encourage a spirit of optimism among his audiences. Although McKinley succumbed to political pressure and failed to promote equality and civil rights as much as he had initially hoped, Justesen shows that his efforts proved far more significant than previously thought, and were halted only by his untimely death.

Benjamin R. Justesen is an editor and historian in Alexandria, Virginia. A former journalist, teacher, and U.S. Foreign Service Officer, he is also the author of George Henry White: An Even Chance in the Race of Life and Broken Brotherhood: The Rise and Fall of the National Afro-American Council.