The Oatman Massacre: A Tale of Desert Captivity and Survival (Paperback) 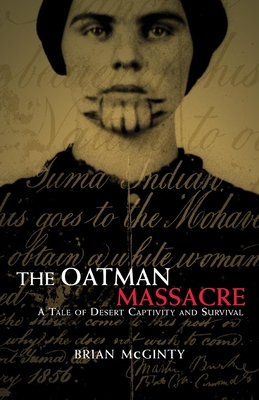 The Oatman massacre is among the most famous and dramatic captivity stories in the history of the Southwest. In this riveting account, Brian McGinty explores the background, development, and aftermath of the tragedy.

Roys Oatman, a dissident Mormon, led his family of nine and a few other families from their homes in Illinois on a journey west, believing a prophecy that they would find the fertile "Land of Bashan" at the confluence of the Gila and Colorado Rivers. On February 18, 1851, a band of southwestern Indians attacked the family on a cliff overlooking the Gila River in present-day Arizona. All but three members of the family were killed. The attackers took thirteen-year-old Olive and eight-year-old Mary Ann captive and left their wounded fourteen-year-old brother Lorenzo for dead.

Although Mary Ann did not survive, Olive lived to be rescued and reunited with her brother at Fort Yuma.

On Olive's return to white society in 1857, Royal B. Stratton published a book that sensationalized the story, and Olive herself went on lecture tours, telling of her experiences and thrilling audiences with her Mohave chin tattoos.

Ridding the legendary tale of its anti-Indian bias and questioning the historic notion that the Oatmans' attackers were Apaches, McGinty explores the extent to which Mary Ann and Olive may have adapted to life among the Mohaves and charts Olive's eight years of touring and talking about her ordeal.