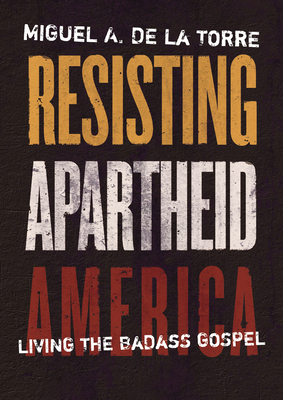 Miguel De La Torre foresees a future America dominated by white nationalists--and equips us with the tools to resist it.

In Burying White Privilege, he opened our eyes to white Christians' complicity in maintaining racist hierarchy in America. In its sequel, Decolonizing Christianity, he encouraged us to decolonize Christianity and return it to its revolutionary roots. Now, in his conclusion to the trilogy, Miguel A. De La Torre shows us the America on our horizon, should we continue down the path of heretical white Christianity--and the outlook is not bright.

Resisting Apartheid America assesses the past and present threads of systemic racism in American politics, from Plymouth Rock to the Capitol on January 6. Sweeping and unsparing in his critique, De La Torre takes on authors revered in Christian theology, including Paul, Augustine, and heroes of the Reformation, aiming to uproot the ideological foundations of racism in Christianity. Following these through lines of oppression, he warns of a decline in democracy and rise in political violence--but equips us with the nonviolent ethical framework to resist this bleak future. Resisting Apartheid America is a clarion call to Christians to remake America in the image of the God of liberation.