Human Work in the Age of Smart Machines (Paperback) 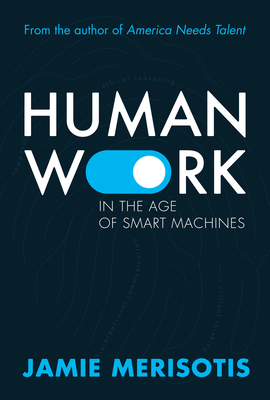 A public policy leader addresses how artificial intelligence is transforming the future of labor--and what we can do to protect the role of workers.

As computer technology advances with dizzying speed, human workers face an ever-increasing threat of obsolescence. In Human Work In the Age of Smart Machines, Jamie Merisotis argues that we can--and must--rise to this challenge by preparing to work alongside smart machines doing that which only humans can: thinking critically, reasoning ethically, interacting interpersonally, and serving others with empathy. The president and CEO of Lumina Foundation, Merisotis offers a roadmap for the large-scale, radical changes we must make in order to find abundant and meaningful work for ourselves in the 21st century. His vision centers on developing our unique capabilities as humans through learning opportunities that deliver fair results and offer a broad range of credentials. By challenging long-held assumptions and expanding our concept of work, Merisotis argues that we can harness the population's potential, encourage a deeper sense of community, and erase a centuries-long system of inequality.

Jamie Merisotis is a globally recognized leader in philanthropy, education, and public policy. Since 2008, he has served as president and CEO of Lumina Foundation, an independent, private foundation that is committed to making opportunities for learning beyond high school available to all. He previously served as co-founder and president of the nonpartisan, Washington, D.C.-based Institute for Higher Education Policy and as executive director of a bipartisan national commission on college affordability appointed by the U.S. president and congressional leaders. Merisotis is the author of America Needs Talent, which was named a Top 10 Business Book of 2016 by Booklist, a publication of the American Library Association. Merisotis is a frequent media commentator and contributor. His writing has appeared in the New York Times, the Wall Street Journal, the Washington Post, National Journal, Stanford Social Innovation Review, Politico, Roll Call, Washington Monthly, and other publications. His work includes experience as an adviser and consultant in southern Africa, the former Soviet Union, Europe, and other parts of the world. A respected analyst and innovator, Merisotis is a member of the Council on Foreign Relations in New York. Merisotis serves as chairman of the Council on Foundations in Washington, D.C., and past chairman of The Children's Museum of Indianapolis, the world's largest museum for children. He also serves on the boards of the Central Indiana Corporate Partnership and the United Kingdom-based European Access Network. He lives with his wife Colleen O'Brien and their children, Benjamin and Elizabeth, in Indianapolis.