Nothing But the Truth: A Memoir (Paperback) 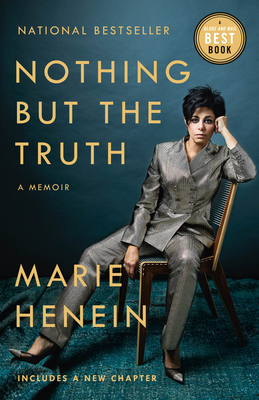 A critically acclaimed, intimate and no-holds-barred memoir by Canada’s top defence lawyer, Nothing But the Truth weaves Marie Henein’s personal story with her strongly held views on society’s most pressing issues.

Marie Henein, arguably the most prominent lawyer in the country, has written a memoir that is at once raw, beautiful, and altogether unforgettable. Her story, as an immigrant from a tight-knit Egyptian-Lebanese family, demonstrates the value of strong role models—from her mother and grandmother, to her brilliant uncle Sami who died of AIDS. She learned the value of hard work, being true to herself and others, and unapologetically owning it all.

Marie Henein shares here her unvarnished view on the ethical and practical implications of being a criminal lawyer, and how the job is misunderstood and even demonized. Ironically, her most successful cases made her a “lightning rod” in some circles, confirming her belief that much of the public’s understanding of democracy and the justice system is based on popular culture and social media, and decidedly not the rule of law. As she turns fifty and struggles with the corrosive effect becoming invisible has on women, Marie doubles down on being even more highly visible and opinionated as she deconstructs, among other things, the otherness of the immigrant experience (Where are you really from?), the pros and cons of being a household name in this country, opening her own boutique law firm, and the commoditization of women’s previously unpaid labour popularized by the likes of Martha Stewart. Nothing But the Truth is refreshingly unconstrained and surprising—an account by a woman at the top of her game in a male-dominated world.

MARIE HENEIN is a senior partner at Henein Hutchison LLP, recognized in Canadian Lawyer as one of the country's Top Ten Litigation Boutiques. She has been interviewed on CBC's The National, written for the Globe and Mail, and spoken widely on her career. Named Toronto's 15th Most Powerful Person by Toronto Life, she has been repeatedly recognized as one of the Top 25 Most Influential Lawyers by Canadian Lawyer and was a recipient of the Laura Legge Award from the Law Society of Ontario and the Law Society of Upper Canada Medal. She lives in Toronto with her husband and two children.


“It’s an articulate telling of the life of an immigrant to Canada, adjusting to the cultural differences, rising above adversity, and becoming a role model for Canadian women. It’s a feminist treatise.” —Boomer Broadcast