The Apache Wars: The Hunt for Geronimo, the Apache Kid, and the Captive Boy Who Started the Longest War in American History (Paperback) 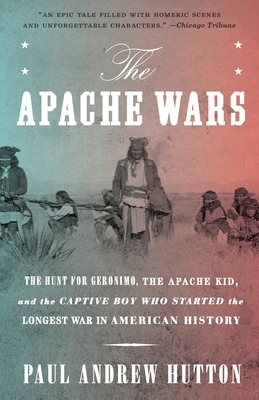 In the tradition of Empire of the Summer Moon, a stunningly vivid historical account of the manhunt for Geronimo and the 25-year Apache struggle for their homeland.

They called him Mickey Free. His kidnapping started the longest war in American history, and both sides--the Apaches and the white invaders—blamed him for it. A mixed-blood warrior who moved uneasily between the worlds of the Apaches and the American soldiers, he was never trusted by either but desperately needed by both. He was the only man Geronimo ever feared. He played a pivotal role in this long war for the desert Southwest from its beginning in 1861 until its end in 1890 with his pursuit of the renegade scout, Apache Kid.

In this sprawling, monumental work, Paul Hutton unfolds over two decades of the last war for the West through the eyes of the men and women who lived it. This is Mickey Free's story, but also the story of his contemporaries: the great Apache leaders Mangas Coloradas, Cochise, and Victorio; the soldiers Kit Carson, O. O. Howard, George Crook, and Nelson Miles; the scouts and frontiersmen Al Sieber, Tom Horn, Tom Jeffords, and Texas John Slaughter; the great White Mountain scout Alchesay and the Apache female warrior Lozen; the fierce Apache warrior Geronimo; and the Apache Kid. These lives shaped the violent history of the deserts and mountains of the Southwestern borderlands--a bleak and unforgiving world where a people would make a final, bloody stand against an American war machine bent on their destruction.

PAUL ANDREW HUTTON is an American cultural historian, author, documentary writer, and television personality. He is also a professor of history at the University of New Mexico, a former executive director of the Western History Association and former president of the Western Writers of America.

"Paul Hutton is one the great scholars of Western Americana, but he's also a natural born storyteller, with a rare gift for locating the deep ironies that suffuse history. Hutton has brought this sere landscape—and this classic clash of the borderlands—to pungent life on the page." —Hampton Sides, author of Blood and Thunder and In the Kingdom of Ice

“A fast-paced, well-written page-turner. Hutton gives an excellent account of individuals, both Native American and White, who contested for control of the Southwest in the 19th Century.” —R. David Edmunds, Watson Professor of American History, University of Texas at Dallas

“Hutton captures the intensity and drama of the history of both sides in this vibrant segment of western history.” —Robert M. Utley, author of Geronimo and The Lance and the Shield

“After reading this masterfully researched and written book I thanked my lucky stars for Paul Hutton. It took an author and historian of his caliber to at long last deliver the definitive explanation of the longest war in the nation's history. The wait was worth it. By using the legendary Apache scout and manhunter Mickey Free as a vehicle to tell the story, Hutton cuts through layers of myth exposing one of the most exciting and pivotal episodes in the annals of the American West.”  —Michael Wallis, author of The Wild West: 365 Days

"Humane, insightful, and vivid, The Apache Wars immerses readers in the rugged landscape of Apacheria, the meeting ground and battlefield of nations. In telling the gripping story of the Apaches' long fight against Mexico and the United States, Hutton proves once again why he is a great writer as well as a great historian." —T.J. Stiles, Pulitzer-prize winning author of Custer's Trials: A Life on the Frontier of a New America

“[A] sprawling, fascinating tale of conflict in the late 19th-century American southwest...Hutton moves beyond standard descriptions of battles between Apache warriors and American troops (though there are plenty of those) to paint a larger, more detailed picture of Southwestern life... Hutton provides an unexpected twist that keeps the story fresh until the end.” —Publishers Weekly

"“His prose is equal to the vastness of his landscape and the clash of so many era-defining personalities...Mr. Hutton is also terrier-like in his persistence in tracking and deconstructing every significant skirmish in the conflict, and there are plenty of them. In terms of colorful characters, there is an embarrassment of riches...Where The Apache Wars really shines is in the richness of its details, well researched and deeply understood.”—Wall Street Journal

"The accounts of armed conflict are stirringly told and often read like a Western thriller… [T]horoughly researched.”—Kirkus Reviews

"An outstanding, comprehensive overview of the Apache Wars of Arizona and New Mexico...This recounting of the Southwestern battles for Apacheria will be valued by general readers and researchers alike for its colorful personalities and strong representation of the cultural context of historical events.”—Library Journal

"“[A] major work of history on a much-neglected subject... The Apache Wars is an epic tale filled with Homeric scenes and unforgettable characters. It's a quintessential American story that too few Americans know.”—Chicago Tribune

""A comprehensive narrative, as encompassing as the American West itself."—Denver Post

"Sharply and unflinchingly explores the many years of bloody, thunderous conflicts between soldiers based in camps and forts and elusive Apaches in New Mexico and Arizona.”—Albuquerque Journal