Money and Power: How Goldman Sachs Came to Rule the World (Paperback) 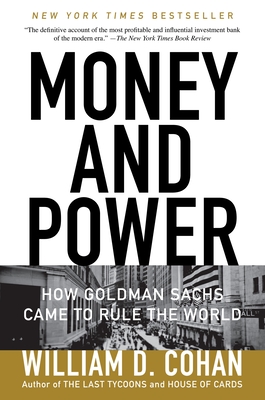 The bestselling author of the acclaimed House of Cards and The Last Tycoons turns his spotlight on to Goldman Sachs and the controversy behind its success.

From the outside, Goldman Sachs is a perfect company. The Goldman PR machine loudly declares it to be smarter, more ethical, and more profitable than all of its competitors. Behind closed doors, however, the firm constantly straddles the line between conflict of interest and legitimate deal making, wields significant influence over all levels of government, and upholds a culture of power struggles and toxic paranoia. And its clever bet against the mortgage market in 2007—unknown to its clients—may have made the financial ruin of the Great Recession worse. Money and Power reveals the internal schemes that have guided the bank from its founding through its remarkable windfall during the 2008 financial crisis. Through extensive research and interviews with the inside players, including current CEO Lloyd Blankfein, William Cohan constructs a nuanced, timely portrait of Goldman Sachs, the company that was too big—and too ruthless—to fail.

William D. Cohan is the author of the New York Times bestsellers House of Cards and The Last Tycoons, which won the 2007 FT/Goldman Sachs Business Book of the Year Award. He is a contributing editor at Vanity Fair, has a weekly opinion column in Bloomberg View, and writes frequently for Fortune, The Atlantic, Art News, BloombergBusinessWeek, The New York Times, The Financial Times, The Irish Times and The Washington Post, among other publications. He also is a contributing editor on Bloomberg Television and a frequent on-air contributor to MSNBC, CNN and CNBC. A former investment banker, Cohan is a graduate of Duke University, Columbia University School of Journalism and the Columbia University Graduate School of Business.

“[The] definitive account of the most profitable and influential investment bank of the modern era.” —The New York Times Book Review

“The best analysis yet of Goldman’s increasingly tangled web of conflicts. . . . The writing is crisp and the research meticulous.” —The Economist

“[A] revelatory account of the rise and rise of Goldman Sachs. . . . A vast trove of material.” —Financial Times

“Well done and absorbing. Cohan’s grasp of the . . . recent inside politics of the firm is sure and convincing.” —The Washington Post

“The frankest, most detailed, most human assessment of the bank to date. Cohan portrays a firm that has grown so large and hungry that it's no longer long-term greedy but short-term vicious. And that’s the wonder—and horror—of Goldman Sachs.” —BusinessWeek

“Brings the bank’s sometimes ‘schizophrenic’ behavior to vivid life. . . . Cohan evinces an eye for telling images and an ear for deadpan quotations. . . . [and] puts his skepticism to good use.” —Bloomberg News

“[Cohan is] one of our most able financial journalists.” —Los Angeles Times

“A former Wall Street man and a talented writer, [Cohan] has the rare gift not only of understanding the fiendishly complicated goings-on, but also of being able to explain them in terms the lay reader can grasp.” —The Observer (London)

“Cohan writes with an insider’s knowledge of the workings of Wall Street, a reporter’s investigative instincts and a natural storyteller’s narrative command.” —The New York Times