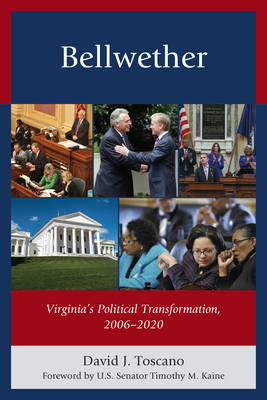 Throughout the early years of the 20th century, Virginia was viewed as a Republican state. Citizens in the Commonwealth had not voted for a Democratic presidential candidate since 1964. In 2000, the GOP had just won the governor's race, held both U.S. Senate seats, and had majorities in both the House of Delegates and the State Senate. By 2020, all of that had been reversed. During that period, Democrats won four of five governors contests, elected two US senators, and voted for Democratic presidential candidates in every year since 2008. In 2019, the House of Delegates, where Republicans maintained a 68-32 supermajority in 2011, flipped to Democratic control. With it, the state became a Democratic trifecta, where the party controlled all of the state's levers of power. Bellwether tells the story of how this happened from someone who was "in the room at the time." David Toscano began his service in the House in 2006 and became the Democratic Leader of the body in 2011. He examines the special nature of Virginia politics, the demographic changes that underpin much of its shifting political fortunes, and the policies and personalities at the center of the state's dynamics for the last two decades.

David J. Toscano is an attorney who served seven terms in the Virginia House of Delegates until his retirement in 2020 and was the Democratic Leader in that body from 2011 until 2019.