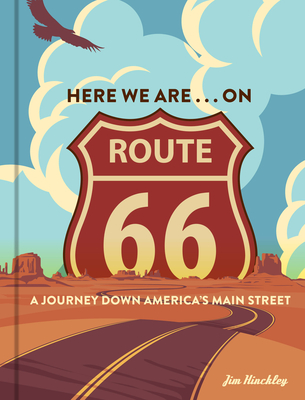 Here We Are . . . on Route 66 provides the fascinating histories of iconic landmarks and cultural touchstones associated with America’s most famous highway—and celebrates lesser-known gems just off the beaten path.

Arranged by classic Route 66 topics, is a beautifully produced history rather than a guidebook. Each spread gives you a different 66 site or attraction, along with a concise and authoritative history illustrated with colorful photography, evocative historical imagery, and collectibles like postcards, ads, and more. Topics include: Hinckley is perhaps the most internationally recognized authority on the subject of America’s Main Street. This collection offers you the stories behind Route 66 icons such as Baxter Springs and Tucumcari, Meramec Caverns, Arroyo Seco Byway, Berghoff’s and the Oatman Hotel, Munger Moss and Wigwam Motel—and dozens more. Hinckley also treats you to a fresh look at lesser known but deserving attractions.

At nearly a century old, Route 66 remains the embodiment of the classic American highway. Written by an acknowledged authority on the subject, wonderfully illustrated, and presented in a manner that allows you to dip in and out, Here We Are . . . on Route 66 is a must-have for your Route 66 bookshelf.

Jim Hinckley is the author of twenty books and hundreds of feature articles on Route 66, the American Southwest, and the American auto industry. He has been a featured speaker at European Route 66 festivals in Germany and the Czech Republic, and at events in the United States and Canada. Hinckley is a former associate editor for Cars & Parts, and currently writes a monthly feature for New Zealand-based MotoringNZ. He also assists with the creation of visitor guides for communities such as Tucumcari, New Mexico, and the development of historic district walking tours. Jim is the creator of the Jim Hinckley’s America network that includes a website (jimhinckleysamerica.com/), social media, the weekly livestream "Coffee with Jim" program, a YouTube channel, and the "Wake Up with Jim" podcast. Linked with this are community education programs developed to foster an increased awareness of an area’s history and its role in the development of tourism as a component in economic development.