The Equation That Couldn't Be Solved: How Mathematical Genius Discovered the Language of Symmetry (Paperback) 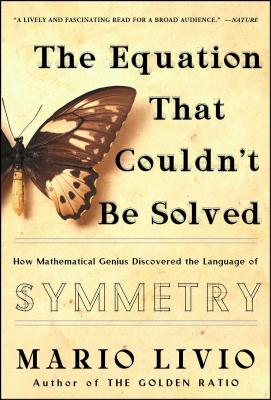 What do Bach's compositions, Rubik's Cube, the way we choose our mates, and the physics of subatomic particles have in common? All are governed by the laws of symmetry, which elegantly unify scientific and artistic principles. Yet the mathematical language of symmetry-known as group theory-did not emerge from the study of symmetry at all, but from an equation that couldn't be solved.

For thousands of years mathematicians solved progressively more difficult algebraic equations, until they encountered the quintic equation, which resisted solution for three centuries. Working independently, two great prodigies ultimately proved that the quintic cannot be solved by a simple formula. These geniuses, a Norwegian named Niels Henrik Abel and a romantic Frenchman named Évariste Galois, both died tragically young. Their incredible labor, however, produced the origins of group theory.

The first extensive, popular account of the mathematics of symmetry and order, The Equation That Couldn't Be Solved is told not through abstract formulas but in a beautifully written and dramatic account of the lives and work of some of the greatest and most intriguing mathematicians in history.

Mario Livio is an internationally known astrophysicist, a bestselling author, and a popular speaker who has appeared on The Daily Show, 60 Minutes, and NOVA. He is the author of the bestsellers The Golden Ratio, Brilliant Blunders, and Galileo. He lives in Baltimore, Maryland.

"A wide-ranging exploration of the phenomenon of symmetry....There's math, yes, but there are also tales of love, violence, history -- and the whole, in this case, turns out to be greater than the sum of those parts." -- Mary Carmichael, Newsweek

"Fascinating. . . . [Livio] writes passionately about the role of symmetry in human perception and the arts." -- The Economist

"A lively and fascinating read for a broad audience." -- Nature