Andrew Jackson and the Miracle of New Orleans: The Battle That Shaped America's Destiny (Hardcover) 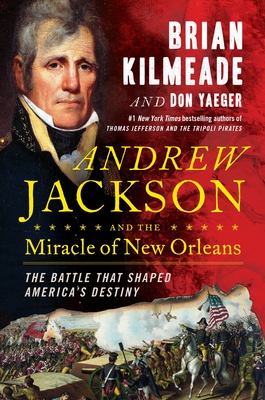 Another history pageturner from the authors of the #1 bestsellers George Washington's Secret Six and Thomas Jefferson and the Tripoli Pirates.

Into this dire situation stepped Major General Andrew Jackson. A native of Tennessee who had witnessed the horrors of the Revolutionary War and Indian attacks, he was glad America had finally decided to confront repeated British aggression. But he feared that President Madison’s men were overlooking the most important target of all: New Orleans.

If the British conquered New Orleans, they would control the mouth of the Mississippi River, cutting Americans off from that essential trade route and threatening the previous decade’s Louisiana Purchase. The new nation’s dreams of western expansion would be crushed before they really got off the ground.

So Jackson had to convince President Madison and his War Department to take him seriously, even though he wasn’t one of the Virginians and New Englanders who dominated the government. He had to assemble a coalition of frontier militiamen, French-speaking Louisianans,Cherokee and Choctaw Indians, freed slaves, and even some pirates. And he had to defeat the most powerful military force in the world—in the confusing terrain of the Louisiana bayous.

In short, Jackson needed a miracle. The local Ursuline nuns set to work praying for his outnumbered troops. And so the Americans, driven by patriotism and protected by prayer, began the battle that would shape our young nation’s destiny.

As they did in their two previous bestsellers, Kilmeade and Yaeger make history come alive with a riveting true story that will keep you turning the pages. You’ll finish with a new understanding of one of our greatest generals and a renewed appreciation for the brave men who fought so that America could one day stretch “from sea to shining sea.”

BRIAN KILMEADE and DON YAEGER are the coauthors of George Washington's Secret Six and Thomas Jefferson and the Tripoli Pirates, both New York Times bestsellers. Kilmeade cohosts Fox News Channel's morning show Fox & Friends and hosts the daily national radio show The Brian Kilmeade Show. He lives on Long Island. This is his fifth book. Yaeger has written or cowritten twenty-five books and lives in Florida.

“Riveting history that reads like a stay-up-all-night thriller. Don’t miss this book!”
–Brad Thor, author of Use of Force

“A tale as improbable as it is spellbinding, told with deft touch and insightful clarity. Brian Kilmeade has done it again.”
–General Stanley McChrystal (U.S. Army, Retired), author of Team of Teams

" The scholarship is impeccable, the topic immensely important, the story masterfully crafted. This little gem of a book belongs on the bookshelf of every history buff. What a triumph!"
–Jay Winik, author of April 1865 and 1944

"A wild, page-turning history of one of America’s most fascinating battles.”
–Brad Meltzer, bestselling author of The President’s Shadow

"Brian Kilmeade, who has a gift for narrative and an intuitive feel for great stories, has written an exciting account of New Orleans and how that battle changed America down the decades."
–Jon Meacham, author of Thomas Jeffersonr, American Lion, Destiny and Power, and Franklin and Winston.

"A riveting introduction to one of the seminal battles in U.S. History.  The War of 1812 folk legend of Old Hickory rides high on his horse again in this engrossing overview for readers of all ages. Highly recommended!"
–Douglas Brinkley, Professor of History at Rice University and author of Rightful Heritage

"Kilmeade shows how the patriotism of Jackson and his generation made America great in the first place. A terrific read."
–Jane Hampton Cook, presidential historian and author of The Burning of the White House

“The reader gets an inkling of the grit that made America great.”
–Erik Prince, author of Civilian Warriors