More Than Eyes Can See: A Nine Month Journey Through the AIDS Pandemic. (Paperback) 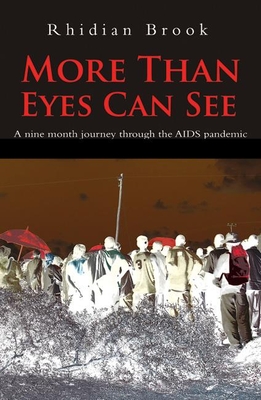 Sent in 2006 by the Salvation Army to bear witness to the work they were doing in response to the AIDS pandemic, Rhidian Brook, his wife, and two children follow a trail of devastation through communities still shattered and being broken by the disease--truck stop sex workers in Kenya, victims of rape in Rwanda, child-headed families in Soweto, children of prostitutes in India. It is a remarkable journey among the infected and the affected through a world that, despite seeming on the brink of collapse, is being held together not by power, politics, guns, or money, but by small acts of kindness performed by unsung people who choose to live in hope.

The problem of AIDS and HIV is a cause supported by many well-known people and events. The recent RED campaign has received publicity due in part to its spokesman, Bono of U2. This book is aimed at a young, politically aware audience who wants to make a difference.

Rhidian Brook is an award-winning novelist, the previous winner of the Somerset Maughan Award, a Betty Trask Award, and a scriptwriter for Silent Witness on an ongoing basis. He has written articles on faith, travel, social issues, and education for newspapers including The Observer, Guardian, and Daily Telegraph. He is also a regular contributor to Radio 4's Thought for the Day program.

Rhidian Brook is a previous winner of the Somerset Maughan Award, a Betty Trask Award winner and his first two novels were published by Harper Collins. He is a high profile radio broadcaster on Radio 4. His film, 'Mr Harvey Lights a Candle' with Timothy Spall was seen by millions in 2005 on BBC 1.