Notes from the 3rd Rail: Civilization in the Crosshairs (Paperback) 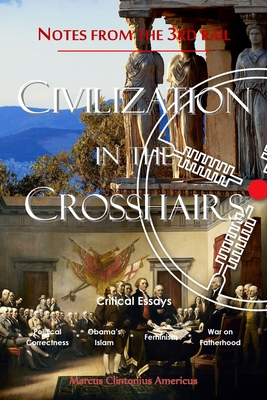 History draws anything but a straight line from the Athenian cradle of democracy and birth of rationalism to the U.S. Constitution and Bill of Rights. Civilization exists at the whim of both nature and human folly, constantly tested by barbarians at the gates and moral corrosion from within.

"Notes From the 3rd Rail: Civilization in the Crosshairs" is a tumescent middle-finger to political correctness. Sacred cows are cut down like sacrificial lambs, one by one: feminism, multi-culturalism, Black Lives Matter, and domestic violence tropes.

Skewering political correctness comes naturally to Marcus Clintonius Americus-he should know, he's been doing it for 2,000 years according to his "bio"-in Latin, no less

Highlighted by his "Self-Othering" thesis as the root cause of political correctness, followed by a tour-de-force, line-by-line rebuttal of President Obama's "Why I don't say 'radical Islam'" speech, Marcus Clintonius cuts a blistering path through the Left's landscape of lunacy.

Collected in this book are a dozen essays addressing some of the darkest forces that threaten the West today: feminism, political correctness, the War on Fatherhood, radical Islam and racial politics, all emanating from the wellspring of cultural suicide: the college campus.