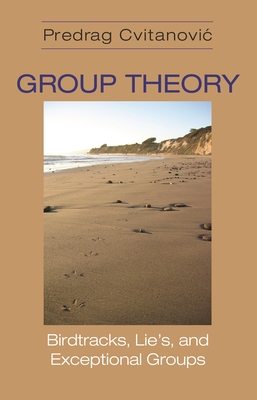 By Predrag Cvitanovic
$68.75
Ships from Warehouse, Usually in 1-8 Days

If classical Lie groups preserve bilinear vector norms, what Lie groups preserve trilinear, quadrilinear, and higher order invariants? Answering this question from a fresh and original perspective, Predrag Cvitanovic takes the reader on the amazing, four-thousand-diagram journey through the theory of Lie groups. This book is the first to systematically develop, explain, and apply diagrammatic projection operators to construct all semi-simple Lie algebras, both classical and exceptional.

The invariant tensors are presented in a somewhat unconventional, but in recent years widely used, birdtracks notation inspired by the Feynman diagrams of quantum field theory. Notably, invariant tensor diagrams replace algebraic reasoning in carrying out all group-theoretic computations. The diagrammatic approach is particularly effective in evaluating complicated coefficients and group weights, and revealing symmetries hidden by conventional algebraic or index notations. The book covers most topics needed in applications from this new perspective: permutations, Young projection operators, spinorial representations, Casimir operators, and Dynkin indices. Beyond this well-traveled territory, more exotic vistas open up, such as negative dimensional relations between various groups and their representations. The most intriguing result of classifying primitive invariants is the emergence of all exceptional Lie groups in a single family, and the attendant pattern of exceptional and classical Lie groups, the so-called Magic Triangle. Written in a lively and personable style, the book is aimed at researchers and graduate students in theoretical physics and mathematics.